Your intrepid correspondent has, in the past, talked a big game about his winter swimming capabilities – but it’s only this year that I managed to make it to the Coney Island Polar Bear Swim on New Year’s Day. I’m not sure exactly what I was expecting – a few brave souls, a cadre of hirsute Russians warmed with vodka, a risque bather or two perhaps. What with the impending eviction of the soul of the Coney Island boardwalk (Ruby’s, Shoot the Freak etc.), it seemed that was the year to head down to the beach. And I was not alone in that sentiment. 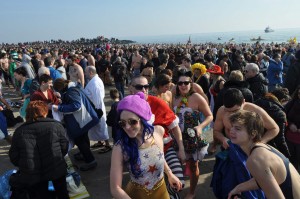 The warm weather – temperatures were near the 50s – surely spurred the less adventurous to join the throng. Or was it nostalgia that brought the teeming thousands to the blustery beach? Much has been written regarding the rapidly changing face of Coney Island, as a wave of development crashes upon the shore for the umpteenth time. Though I’ve missed out on years past, this year the parade of bathers felt like a fist in the air, a signal that no matter the changing face of the boardwalk institutions, Coney Island will forever be a refuge for the tattooed and costumed among us. 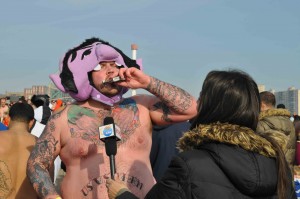 I emailed some friends who were present and their sentiments were similar. Says Aliene de Souza Howell:

I’d been wanting to join the Polar Bears for years because my grandfather was a member. He always described it as him and his friends going for an invigorating dip. So, I was shocked when, waiting in front of Nathan’s for my friend Elena to join me, I watched hundreds of people going past me, in various states of undress and costumes.  Running down the snow covered beach,  we were giddy and freezing, sandwiched in between Latin-American families, pot bellied Eastern European men, tattooed body builders, people clad in superhero costumes and everyone in between.

Elena and I immediately made plans to come back next year with more friends and costumes. It was a rare display of unbiased camaraderie that was free, sober, and in the middle of the afternoon.  We came back to the boardwalk to dry off and get warm in front of small “Save Coney Island” posters affixed to the historic brightly colored hand-painted signs.  It was perhaps the only thing that could have dampened our spirits as I doubted my grandkids would be able to come here as I had followed in my grandfather’s footsteps. 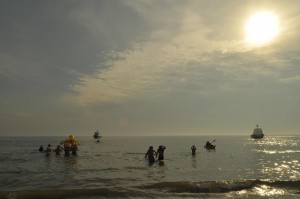 In case you’re wondering – yes, the water was incredibly cold. And yet there was something in the experience that warmed the soul. In the Japanese Shinto tradition, the rite of misogi, or ritual purification, is undertaken to wash away sin, and the Jewish mikveh is similar. Though the Polar Bear Swim lacks the codified structure of a ritual cleansing – and though some might disagree, I didn’t feel I had any particular sins to wash away – the plunge into the Atlantic was surely a refreshing way to start the new year. I’ll be back next year, regardless of what businesses are holding court atop the boardwalk’s wooden slats. 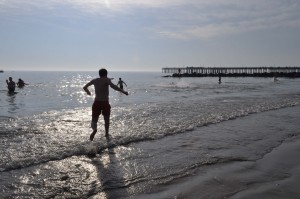 For the Birds: Mike Tyson Returns to Brooklyn

Report: Marty Gets his Apple Store