Carolyn Cooke’s novel, “Daughters of the Revolution,” is a curious book, in all good senses of the word. The novel covers the years 1963-2005 at the Goode School and its surrounding town. Several revolutions—the sexual revolution, the quieter, smaller but still potent revolution that resulted in first, African-Americans, then girls, then African-American girls being admitted and eventually becoming valued—provide the events, and the subtext, of the novel. “Daughters of the Revolution” more or less describes events in the lives of the Headmaster Goddard Boyd, known familiarly as “God,” and a few other alumni, staff, spouses, and children connected to the school. And to each other.

The school itself, though its influence is deeply felt, never actually takes form. It floats mistily off the shore of Cape Wilde, the mythical North Shore town where much of the novel takes place. This is not The Rector of Justin. I found it potent stuff, though I’m aware that some readers might find it obvious. (The “Goode” School. Really?) What do you think? Which revolutions did you live through? Did Carolyn Cooke capture them? Share your impressions in the comments. 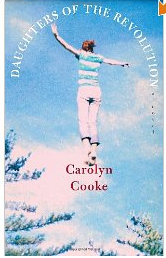 Inaugural Drink of the Week: The Blue Bubbly