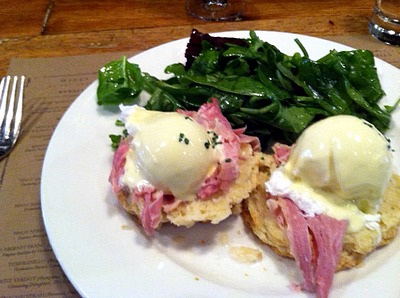 This past February at the Grace Church Winterfair Silent Auction my wife bid on, and won, brunch for two at Colonie, 127 Atlantic Avenue (between Clinton and Henry). We finally got around to doing it today. We arrived at around 11:30 (brunch there starts at 11:00) and found all tables occupied (Colonie only takes reservations for parties of five or more) but were offered seats at a counter facing the open kitchen. This proved to be a lucky circumstance, as we enjoyed watching the kitchen crew at work and later, when the pace of orders slowed, some conversation. My wife ordered the biscuit Benedict (see photo, and menu here–scroll down to brunch). Judging by the number of times I heard the sous-chef call out “Benny!” I take it this is the most popular brunch item. More photos and text after the jump.

My wife was pleased by her choice. The egg was, she said, the most perfectly poached she had ever seen, and the seasoning was just right. The biscuit was excellent. I took a sample, and my only dissent was that the “heritage ham” was less flavorful than I expected. 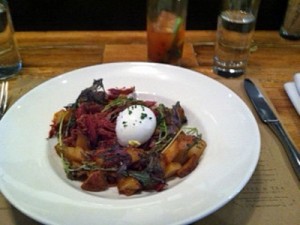 I chose the duck hash (photo at left) and had no regrets. The duck was sliced in thin strips, and very savory, the potatoes were done to the right degree of crunchiness, and the seasoning was just so. There was another of the perfectly poached eggs. I washed it down with a “bloody Caesar,” a bloody Mary made with Clamato juice. 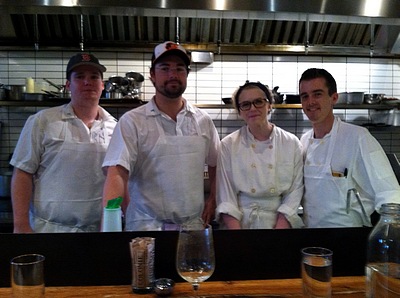 Here’s the crew who made it all so well. As we finished our meal and the pace of orders decreased, we were able to have some enjoyable conversation about cooking and baseball. I call them the “anything but the Yankees” crew–note the Red Sox (to my wife’s delight) and Orioles caps.

How You Can Help Brooklynites Impacted By Hurricane Sandy