October 28, 2012
An encouraging omen? Brooklyn Heights Blog reader Jay took this video from the Brooklyn Heights Promenade of a rainbow appearing to extend from the Statue of Liberty to lower Manhattan.
9:30 a.m., Tuesday, October 30: There’s still a brisk wind but, at the moment, no rain. Lots of people are out, and the flimsy tape barrier across the Promenade entrance is being ignored with impunity. Our building crew are out clearing leaves from the sidewalk.
Damage to the Brooklyn Heights area has been limited to downed trees and limbs and some minor structural damage. Nearby low-lying areas have been flooded–the storm surge was a whopping thirteen feet above normal–and, in a flooding related incident, there was a fire, evidently caused by electrical problems, in the basement of a large co-op apartment building just below the Heights. Fortunately, no one was hurt.
Other areas of the City were not so fortunate. Probably the worst disaster was a fire that destroyed about eighty houses in the Breezy Point section of Queens. There is extensive damage to shorefront properties throughout the region. As has been widely reported, an explosion destroyed an electrical substation in lower Manhattan, and much of that part of the City, which includes the financial district, will be without power for an indefinite period. A concern for Brooklyn residents like me is that the subway tunnels connecting Brooklyn to Manhattan have been flooded with salt water, which could damage switches and signals and keep trains from running for several days. 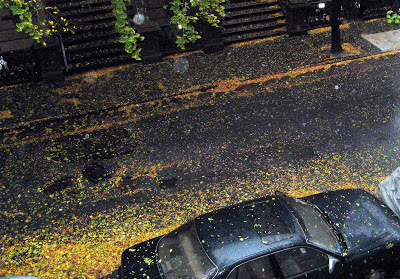 It’s dark outside, and there’s a steady rain falling, The wind seems to have abated, but as I type this, there’s a strong gust. I’ll be back in the morning.
4:40 p.m.: Despite the police barrier, and a cruiser occasionally coming by with a loudspeaker imploring people to get off the Promenade, they keep coming. This is confirmed by the video made by my BHB colleague Karl Junkersfeld today, featuring an appearance by our publisher, Homer Fink.
Update: The Daily Beast has this snarky view of what’s going on in the neighborhood.
2:30 p.m.: The wind is stronger and steadier, but there are still people on the sidewalks, some walking dogs.
11:30 a.m.: The wind is picking up again. Tape has been stretched across the entrance to the Brooklyn Heights Promenade, which is part of the New York City Parks system, and therefore subject to an order closing all NYC parks for the remaining duration of the storm. A civilian leaving the Promenade helpfully lifts the tape for an NYPD car to enter.
10:30 a.m.: I decide to take a walk to the Brooklyn Heights Promenade, just across the street from where I live. The wind is minimal, a few desultory drops of rain come down, and lots of people are out. Afterward, I walk back a block and find our local supermarket, Key Food, is open, so I’m able to score two things I forgot yesterday: half-and-half for my coffee and kitty treats.
Fellow Brooklyn Heights Blog contributor Chuck Taylor went out with his camera earlier and got these photos.
8:15 a.m. Monday, October 29. There’s a strong, steady wind, and some rain has fallen during the night. A neighbor is walking his French bulldog.
10:30 p.m.: the Jersey lights are still bright, the wind has settled, and The Weather Channel’s storm tracker shows the center of the storm still a little south and east of Cape Hatteras. The North Carolina Outer Banks must be taking quite a pounding now. TWC’s projected path has it somewhere well east of the Virginia capes tomorrow evening (gad, this thing moves slowly), though we should be feeling its effects pretty strongly by then. Projected landfall is somewhere around the mouth of Delaware Bay Tuesday morning. I hope Cape May’s Victorians emerge unscathed.
It’s 8:55 p.m. and I can still see New Jersey from my window. The wind seems to have calmed down a bit.
At 6:30 p.m. I realize I’ve forgotten to put Idaho potatoes in the oven prior to my wife’s safe arrival from Boston, so I go on an emergency run for Tater Tots. I find the wind picking up, but still no wet stuff. 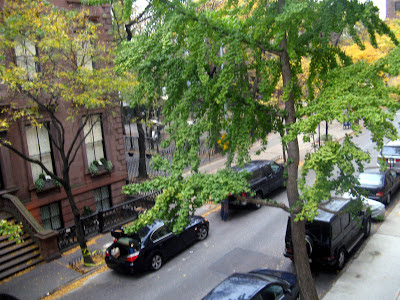 At 5:21 p.m., dusk is approaching. The sky is a solid gray overcast. The playground is empty. There is a steady, soft breeze. Sandy, it seems, will arrive after nightfall. 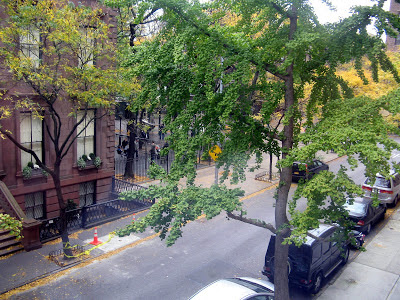 For the duration, I’ll be posting updates, including photos when possible, on the storm’s progress as seen from my window overlooking Pierrepont Place in Brooklyn Heights. If things get exciting enough, I may include some video snippets. This was the scene at 10:20 this (Sunday) morning: some sunshine, a gentle breeze, and kids in the playground. New York City is taking storm preparation very seriously: evacuation orders have been issued for low lying areas as a storm surge that could be as much as eight feet above normal is possible; and the subway system is shutting down starting at 7:00 this evening. Stay tuned.