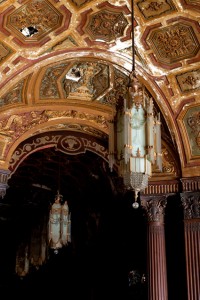 Though Williamsburg-based photographer Matt Lambros is a cinephile who appreciates everything from indie films to popcorn flicks, these days he finds himself mainly frequenting movie theaters that have long since gone dark as part of his current photo documentation project “After The Final Curtain.”

It all started several years ago when Lambros tagged along with some friends to see a film at Manhattan’s Village East Cinema. Once inside the theater, which was created in the 1920s by Brooklyn’s own Louis N. Jaffe, he was instantly captivated by its magnificent interior ornately designed in the Moorish Revival style.

“I just remember looking up at the chandelier and saying, ‘Oh my God, the architecture in this place is amazing’…. and that got me wondering about any abandoned theaters around,” explains Lambros, who moved to Brooklyn in 2007.

Lambros eventually discovered the Loew’s Kings Theatre in Flatbush, another movie house built in the 1920s that had suffered a very different fate from the Village East Cinema. Shuttered more than two decades ago, the once splendid theater was sliding into ruin and Lambros was able to capture this eerily elegant decay in a series of images that marked the start of his “After The Final Curtain” project.

“I started photographing the Kings Theatre and from there, I started investigating more and kept finding more (abandoned cinemas) and it just branched out,” Lambros says. “Soon, I had enough (photos) and I decided I’d start a blog about it.”

To date, Lambros has photographed a total of 45 shuttered theaters in the Northeast and Midwest. Having recently returned from a shoot in Detroit, he has been continuing to compile a list of potential subjects located all across the United States. “I have plans to go pretty much everywhere in the entire country… it’s just a matter of getting there,” the photographer notes. 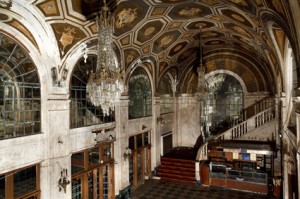 Though reticent to speak about how he obtains access to the movie houses, Lambros does say he is careful to not venture into the buildings alone. He often travels with a small group of friends to the abandoned locales, which can pose a challenge to photograph, since there is usually very little natural light streaming into the interior spaces. Thus, Lambros counts a hand-held lantern, a flash and a strobe among his essential tools. The resulting images are stunning, with a touch of surrealism about them, much like the ruined cities seen on movie screens that fascinated Lambros as a child.

The photographer traces his penchant for shooting abandoned buildings back to his childhood, as his grandmother found an unusual pastime for keeping him and his brother entertained while their mother was away at work. She took them on field trips to old barns and other deserted buildings in and around Lambros’ hometown of Beekman in Dutchess County, a family hobby that lasted from the time he was four until he was eight.

“That (experience) stayed with me,” Lambros says of his childhood forays into abandoned structures. “I just liked to look at the way the buildings crumbled, I visually enjoyed it, so this (project) is an extension of that,” the photographer explains. 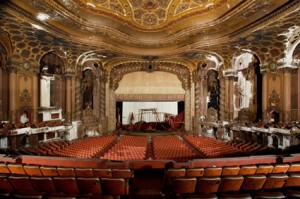 The purpose of “After The Final Curtain” is two-fold, as Lambros not only wishes to document the vestiges of these once glorious cinemas, but also raise awareness of their existence in hopes that some may be saved and restored. In fact, the Loew’s Kings Theatre is currently being restored to the tune of $70 million, with an opening slated for 2014. “It’s a gorgeous theater and I’m really happy that it is going to be restored,” says Lambros, who notes that this cinema still stands out as his favorite among the ones he has photographed.

“Seeing those beautiful images of these grand spaces… and realizing that these theaters are actually quite nearby – maybe even just a few miles from your home – gives you such a larger sense of the possibility of discovery,” says Dylan Thuras, co-founder of Atlas Obscura, an online compedenium of unusual places that celebrates the spirit of exploration.

Thuras invited Lambros to give a presentation about his photography project this past summer as part of the ongoing Atlas Obscura Speakers Series, whose lectures revolve around the theme of discovery in the modern world. The August engagement was so popular that Lambros is now scheduled to give an encore talk, entitled “The Fall of the American Movie Palace,” which is being held tonight at Gowanus’ arts and event space Observatory that is run by a group of artists and writers including Thuras.

“These photographs provide this absolute portal to another space, another version of New York,” Thuras notes. “People sometimes feel very cynical and jaded and think everything interesting has been discovered or done and I just don’t think that’s true at all. I think there are really a lot of amazing things out there and I’m excited to be able to bring someone like Matt in to show that to folks.”

Patti Smith Says Barclays Center is Like a Cockroach