Zagat’s Fifty State Sandwich Survey: Beef on Weck Gets Its Due 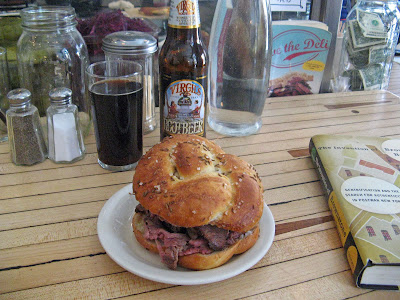 When I was an associate at LeBoeuf, Lamb, “fifty state survey” was a dreaded assignment. It meant going to the library (no Lexis or Westlaw in those days) to determine the law governing some abstruse matter–say, eligibility of liability insurance on exterminators for export to the unlicensed or “surplus lines” market–in each of the fifty states and the District of Columbia. The good people at Zagat (yes, I really do like them) had a much more enjoyable task: finding the “unique regional sandwich” that best characterizes each state, as well as D.C. For the New York sandwich, I expected them to choose pastrami on rye with mustard, served with a half-sour pickle, and would have considered that a worthy option. Instead, I was surprised and delighted that they looked to the western end of the state and chose beef on weck (photo above). As I’ve posted here before, I came to love this sandwich years ago, during my tenure at LeBoeuf, when I was working on client matters in the Buffalo area. 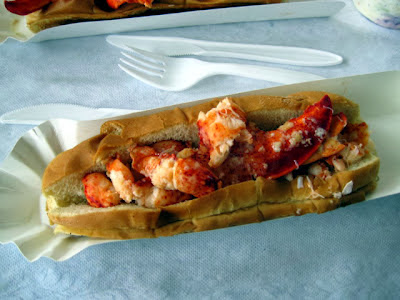 In our neighboring state of Connecticut, Zagat picks another favorite of mine, the Connecticut lobster roll (photo above). There’s more about it here. Not surprisingly, the Maine version gets the nod as the Pine Tree State’s characteristic sandwich.

My old home state, Florida, gets what it ought to: the Cuban sandwich. The one Zagat chose to feature, however, doesn’t look like any Cuban I’ve ever had. That’s probably because it comes from a cafeteria in Miami, not from my old home town, Tampa, the Ur of el Cubano. My first, and therefore iconic, Cuban came from the Silver Ring Bar in Ybor City, an establishment that failed to survive the transformation of Tampa’s Latin Quarter into a corporatized tourist mecca. There’s a lively discussion in the comments on the Zagat piece about what a proper Cuban should, or should not, include. The Zagat description fails to mention what I consider the sine qua non: that the sandwich be pressed in a plancha, a device resembling that used to press panini.

My wife wanted to know what Zagat considers the characteristic sandwich of her home state, Massachusetts. She was amused and pleased to know that it’s the fluffernutter, a variant of the PB&J with Marshmallow Fluff in place of the jelly. Evidently the  General Court (what they call the legislature in the Bay State) and Governor made it the Commonwealth’s official sandwich. Zagat tells us that Marshmallow Fluff was invented in Somerville (though it’s now made in my wife’s hometown, Lynn) by a man named Archibald Query, who sold it door-to-door. Somerville now has an annual Fluffernutter Festival, and it seems we just missed National Fluffernutter Day. Did Congress and the President actually agree to proclaim that? Ah, for the days when they could find common ground on important matters.

The Zagat folks threw a few curves. For my native state, Pennsylvania, one might well expect the Philly cheesesteak, no? No. The “cheesesteak” award goes to…drumroll…Idaho. I put cheesesteak in quotes because the version Zagat chose is made with chicken and bacon. Turning to Philly, Zagat anoints as the Keystone State’s sandwich a hoagie made with roast pork, melted provolone, and broccoli rabe. It looks and sounds delicious, so the next time I’m down there I’ll try to find time to visit Tommy DiNic’s at the Reading Terminal Market.