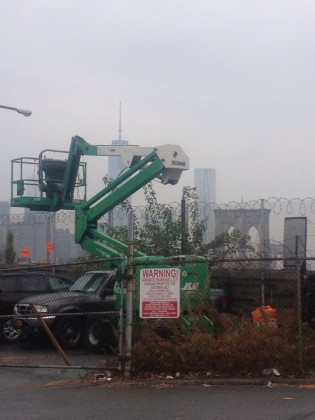 Thomas Wolfe once wrote “Only the dead know Brooklyn.” I don’t know if he meant that in the literal sense, but given the large number of cemeteries here it’s fitting nonetheless.

However, most of us who head to Borough Hall every day, or run across Cadman Plaza to catch the bus, or head home on Hicks Street don’t realize just how dead Brooklyn is—we’re often stepping on long paved-over graves the date back to when the borough was covered with windmills. And these are just the ones historians know about.


Many were family plots that were often forgotten about after the families moved away—or deliberately forgotten about. After all, moving is tough enough without having to figure out who’s taking great-grandpa’s femur. Others were a consequence of gentrification, a buzzword that’s popular today, though gentrification has been taking place as long as the city’s been around. I could cite a few instances where this occurred outside of Brooklyn: Washington Square Park began as potter’s field (a cemetery for the indigent) until the wealthy began to move uptown, then the bodies were disinterred (though not all, just whatever they could grab) and moved to what became Madison Square Park, until the wealthy moved there, and so those bodies were disinterred and moved to Bryant Park … and so on. Don’t believe me? Ask a ConEd employee, the dead have a way of showing up during utility digs.

At any rate, this being the Brooklyn Heights Blog, I’ll highlight some the local sites. 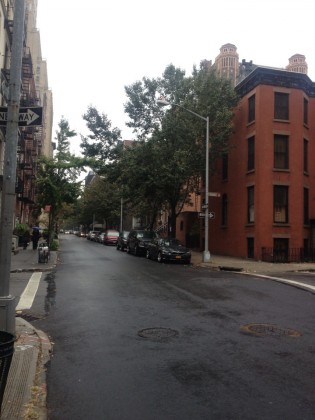 Clover Hill Burial Ground – Hicks and Orange Streets
Clover Hill was the original name of Brooklyn Heights, and this burial spot, which began roughly at Hicks and Orange was used by the British while they occupied Brooklyn during the Revolutionary War. After the Hicks family took possession of the land at the end of the war, they leveled the graveyard, though kept the bodies where they lay. Now it’s next to Plymouth Church.

Sands Street Churchyard – Sands and Adams Streets
The Sands Street Methodist Episcopal Church was established in 1794 and was the first Methodist Church in Brooklyn. Its churchyard was used by all Methodists until 1806, when dwindling real estate meant only active church members were allowed. The Church was sold to developers in 1888, and some but not all of the 300+ bodies were moved to the Cemetery of the Evergreens in Bushwick. 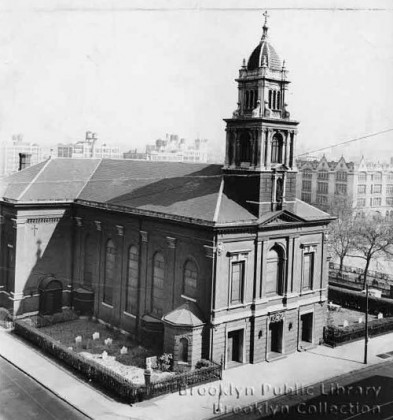 St James Churchyard – Jay and Chapel Streets
In 1822, St James Cathedral became the first Catholic Church in Brooklyn, and its surrounding grounds therefore became the first Catholic Cemetery. Roughly 7,000 people were said to have been buried there until 1849, when burials in that part of Brooklyn were outlawed. A decline in groundskeeping meant that by 1914 all of the markers and many of the headstones were gone; many graves remain in the the churchyard though cut off from the rest of Brooklyn by a giant wall. (Also, my great-great grandparents, Antonio Faggiani and Mary Fagan were married here in 1880. Though they’re buried in Staten Island.) 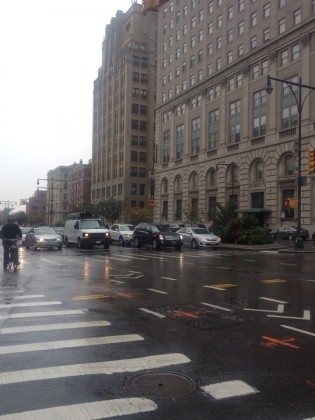 Brooklyn Village Cemetery – Boerum and Livingston Streets
This community cemetery was on land bought by the Schenck family. During construction in the mid 19th century, workers unearthed a gravestone marked “Peter Tyler 183-.” The Brooklyn Historical Society has the transcript of inscriptions from the burial ground here. 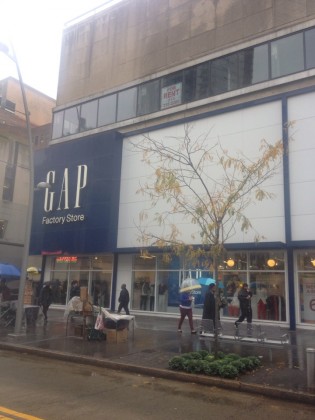 First Reformed Dutch Churchyard of Brooklyn
And last but not least: This Gap sits on the site of one of the first graveyards attached to a church—before this, most people were buried on their farms. Because I have to get this in before Halloween ends, I will quote largely from this October 1875 article out of the Brooklyn Daily Eagle, chronicling “Brooklyn’s early history”:

One of these old burial grounds stood where the lecture room of the First Presbyterian
Church now stands near the beginning of Clinton street. In many cases the occupants of these
scattered graves were removed by those who afterward used the ground for building purposes,
but it is probable that in some cases the original use of the ground was forgotten and the
occupants of the neglected graves still sleep under our very streets or houses. There have
been instances of human remains being found in digging for the foundations of houses.

Of the cemeteries that have been formerly located within our city limits, the oldest one
was that which formerly belonged to the First Reformed Dutch Church. This was located on the
south side of Fulton street, east of Gallatin place, and was 120 by 200 feet in size. It was
then said to be on the Brooklyn and Jamaica Turnpike road, and directly in front of it, in the
middle of the road, stood the original building of the Reformed Dutch Church.

In 1666 the church building referred to as standing in the middle of the road was erected.
It stood just a hundred years, and was torn down and another was built on the same site. This
stood until 1807 when the church moved to their present site on Joralemon street in the rear of
the city hall. The old burial ground was, however, still retained, and the records of the church
show that from time to time interments were made there, and appropriations were made and
committees were appointed to keep it in order. It was used for a burial ground until April 23,
1849, when a city ordinance was passed prohibiting further burials within the city limits and in
accordance with this ordinance the interments in this cemetery, as in the others in the city,
ceased perforce.

So this concludes the Brooklyn Heights/Downtown Brooklyn tour of cemeteries that are no longer. Stay tuned for others, and watch your step.

The St James Cathedral image and much of the research came from the New York Cemetery Project and also the book Graveyard Shift.