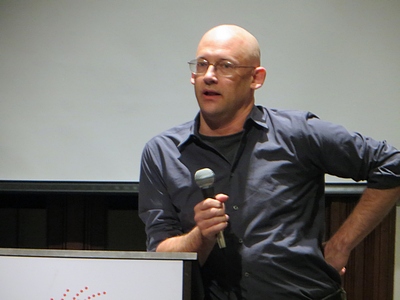 A lot went on at Thursday night’s Brooklyn Heights Association Annual Meeting, much of which is touched on in our “Tale of the Tweets” coverage. I have a few points about the business side of the meeting to expand on. In addition to the awards for “best diner” to Clark Restaurant and to Patricia and John Duffy for their renovation of 265 Hicks Street, there was one to the extended Alperin/Lowe/Sullivan family for their various ventures, including Marissa Alperin Studio on State Street between Columbia Place and Willow Place (a frequent stop for your correspondent when shopping for presents for his wife), clothing store and art gallery Goose Barnacle, kids’ clothing shop Junior Lowe, both on Atlantic Avenue, and the re-opening of the Long Island Bar and Restaurant, also on Atlantic.

A new honor was the Martha Atwater Award, named for the Heights resident, TV producer, wife, and mother tragically killed just over a year ago when an out of control truck hit her on the sidewalk on Clinton Street. The first Martha Atwater honoree was Mary Frost, of the Eagle, who received the award in recognition of her coverage of the battle to keep Long Island College Hospital open. Finally, a “Best New Addition to the Neighborhood” award was given to Ted Zoli, with Brooklyn Bridge Park President Regina Myer accepting on his behalf, for his design of the Squibb Park Pedestrian Bridge.

Clay Shirky (photo above), who holds joint appointments as a professor in New York University’s Tisch School of the Arts and as Distinguished Writer in Residence in NYU’s Arthur. L. Carter Journalism Institute, was evidently prepared (he is a former resident of the area) for an audience heavily salted with geezers, like your correspondent. Hence he saw his mission as dispelling any notion that the internet is leading to the End of Civilization as We Know It. But what is it destroying? There are some distinctions that it is seriously eroding, if not ending.

Shirky said he was sure we were all familiar with the Iliad, the classic account of men at arms and warfare, while a photo of the cast of Hogan’s Heroes was projected above him. Similarly, he said, we knew the Odyssey, the prototypical tale of adventure at sea and on unknown islands; this was accompanied by a photo of the Gilligan’s Island cast. He then showed a typical example of internet trivia: someone’s tweet of their fast food breakfast. Next he showed a page of a blog, NeverSeconds, started by a nine year old Scottish schoolgirl, Martha Payne, who would photograph her school “dinners” (lunches to us) and rate them for taste, healthiness, presence or absence of hairs, and other qualities. Her blog went along for some time, and gained fairly wide readership, with no reaction from school officials until it got mentioned in a newspaper. This caused her to be taken out of class and told she could no longer photograph her school meals. Her “Goodbye” post went, as they say, viral, and generated so much protest that the county council reversed its decision, and Martha’s blog, complete with photos, continues. Shirky said this illustrates one of the cultural changes the internet is effecting: an erasing of the professional/amateur distinction. Once, to reach a wide audience quickly, you had to be a professional journalist. Now, thanks to the internet, even an amateur can.

Another distinction being lost is that between public and private – as Shirky discussed in this chat a few years ago with “Switched”:

Shirky noted that tweeting on Twitter is often used as a means of chatting with friends, as oppeosed to e-mail or text messaging, but that it isn’t private, as e-mail or texting is.

Since I’ve used Wikipedia as a reference, it’s worth noting an interesting statistic that Shirky used in his presentation. The total person-hours used to produce and edit the entire content of Wikipedia up to a fairly recent date is approximately 100 million, but the total time spent watching TV over the same period of time (I don’t recall if he said, but I’m assuming this is worlwide) is estimated at 200 billion person hours. So, the time used by amateurs to produce an encyclopedia is, in shirky’s words, a “rounding error” compared to couch potato (or stationary bike/treadmill) time.

Tell the Bartender Episode 28: The Conspiracy of Silence