First order of business — The New York Times correction of the day (which, quite bizarrely, appeared at conclusion of an article about the Monty Python reunion):

“This article has been revised to reflect the following correction: An earlier version of this review incorrectly described the era in which the band Metallica was first active. It was formed in 1981, not in the 1970s.”

Seriously, man.  With corrections like this, I truly wouldn’t be surprised to read this someday soon:

“This article has been revised to reflect the following correction:  The American Civil War was fought in the 1860s, not the 1940s, and was formally started on April 12, 1861 when Confederate batteries opened fire on Fort Sumter; it was not started, as we indicated earlier, on May 8, 1941 with the opening of the Olsen & Johnson film Helzapoppin.  Likewise, The Ding Dong is a chocolate cake produced by the Hostess Company and not a pet name that the formidable Swiss use for the Large Hadron Collider, as we reported yesterday in a story about Derek Jeter’s farewell tour.  We can confirm, however, that this past Sunday the Large Hadron Collider was gifted to the aforementioned Mr. Jeter by the Texas Rangers in recognition of his role as King of Baseball.”

The New York Times is, allegedly, the freaking newspaper of record, and  NOT knowing that Metallica, ONLY ONE OF THE VERY MOST SUCCESSFUL ROCK ACTS OF THE LAST QUARTER CENTURY, emerged in the ‘80s and not the ‘70s is, well, ludicrous.  Sorry, NYT, that you didn’t need to dig up some fact about Moby, Stephen Merritt, or Elvis Costello, as the details of those preemie newts’ careers are without a doubt forcibly tattooed on the inner thighs of every NY Times employee and freelancer. I mean, I DON’T expect the Times to be up-to-speed on all things metal – for instance, if they confused, say, the release dates of Goatwhore’s Funeral Dirge for the Rotting Sun with the release date of Carving Out the Eyes of God, I would probably be relatively forgiving – but this is freaking METALLICA, for the love of Odin.  I mean, probably every freaking journalist at the Times is forced to learn who played the freaking viola on the fucking Juliet Letters and the name of the church Alan Cummings’ mother was baptized in and where Marina Abramovic went to Nursery School, but somehow, the MOST GENERAL CAREER DETAILS OF THE BIGGEST ROCK BAND OF OUR GENERATION has escaped the Times copy editors. 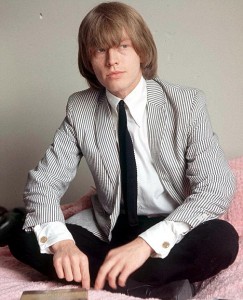 Brian Jones invented the Rolling Stones and defined who they would be and that they would walk into the world with a virtually unprecedented mixture of Rabelaisian strut and Soho sleaze, carrying the flag of the American delta blues (a remarked contrast to the Beatles, who wouldn’t know the delta unless they were flying first class on a Delta plane, and were too busy learning songs from the fucking Music Man to worry too much about the blues).  Brian Jones is a tragic and remarkable symbol for all of us who feel we originated something, and then felt desiccated as our original contributions were dwarfed or forgotten.  Wherever you are, Brian, and whatever incarnation you walk, crawl, or fly above the earth in, I hope you’re happy.

Jim Morrison, of course, was a singer whose father started the Vietnam War.

It is one of the spectacular ironies of geo-cultural history that one of the men intrinsically involved in the giant lie that began the Vietnam War was the FATHER of a prime figure linked to the ‘60s counter culture associated with the opposition to that war.  I mean that is just fantastic. If you don’t know this amazing story, here are the (very) rough edges of it:

On August 2nd and August 4 1964, North Vietnamese Torpedo boats allegedly attacked a U.S. destroyer in the Gulf Of Tonkin (a body of water off the Western coast of Vietnam). The Johnson administration used these attacks as the pretext to escalate the U.S.’s military operations against the North Vietnamese; these attacks, and the response, mark the “true” beginning of the War in Vietnam.  The problem was…the August 2nd attack may have been greatly exaggerated, and most definitely was provoked by the U.S. forces in some fashion; and the August 4th attack, well, that probably didn’t happen at all.  It all appears to have been a very precisely calculated operation to create an excuse for getting the U.S. deeply involved in Vietnam, and the whole thing is similar – very goddamn similar — to the Weapons of Mass Destruction kerfuffle/war crime/hoax that was used as the pretext for invading Iraq. 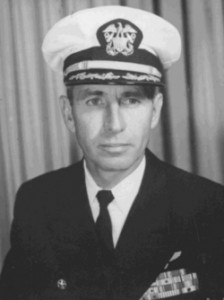 The commander of U.S. Naval forces in the Gulf of Tonkin was Rear Admiral George Stephen Morrison.  He was most certainly “in” on this atrocity, or at the very least was a pathetic, used dupe.

George Stephen Morrison, dupe or war criminal, lived until 2008.  He virtually never commented on his famous son, though towards the very end of his life, the Rear Admiral tautly said “The fact that he’s dead is unfortunate but looking back on his life it’s a very pleasant thought…I had the feeling that he felt we’d just as soon not be associated with his career. He knew I didn’t think rock music was the best goal for him. Maybe he was trying to protect us.”

Let me leave you with this thought:  In a Simpson’s episode deep in the last century, Milhouse exclaims that he lives in fear of “…wedgies, wet willies, or even the dreaded rear-admiral.”

Maybe dear Milhouse was trying to tell us something.