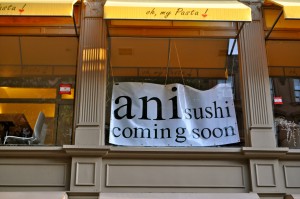 After Oh My Pasta! closed May 26 after just about nine months in business, the space at 142 Montague Street has already lined up its next eatery. Yep, it’s Sushi. A sign in the window tells us that Ani Sushi is coming soon.

The owner is “Sangthongsiri Inc.,” with a hearing scheduled June 6 to serve liquor, wine and beer. A Google search for the business listed its address as 156 Court Street in Brooklyn, 11201.

Before Oh My Pasta!, the locale held Taze Turkish restaurant, and previous to that, Turkish Kapadokya. Aerosoles on the ground level has been in biz as long as all three. 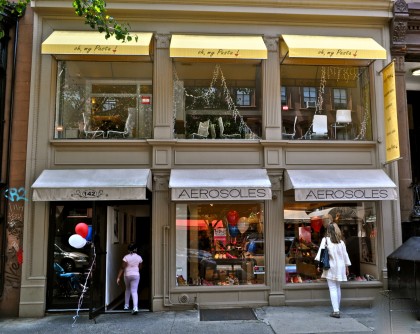 Oh My Pasta! has gone limp. After opening about nine months ago, on September 3, 2011, the Italian eatery at 142 Montague Street has shuttered. The locally run restaurant was owned & operated by Marco Lasala, a native Italian from Barletta in southern Italy, who had moved to Brooklyn Heights, serving a menu of family recipes assembled from his homeland.

While reviews were generally positive for the locale, there’s something about that second-floor location at 142 Montague that’s had a tough time catching a break. Before Oh My Pasta!, the site held Taze Turkish restaurant, and Turkish Kapadokya previous to that. And let’s not forget there have been two fires in the building, one in September 2008 and another in March 2007. Somehow, Aerosoles in the ground floor space has managed to carry on.

Fortunately(?), a successor is already lined up for the second-floor space. A sign posted in the window has a hearing set for “Sangthongsiri Inc.” to open a restaurant, with a request to serve liquor, wine and beer. (The Community Board 2 hearing is June 6 at 6 p.m. at the Brooklyn Hospital Center, 3rd Floor Conference Room, at 121 DeKalb Avenue.)

A Google search for the biz lists its address as 156 Court Street in Brooklyn, 11201. Good luck… and let’s hope the joint’s name is a little easier on the ears than Sangthongsiri. 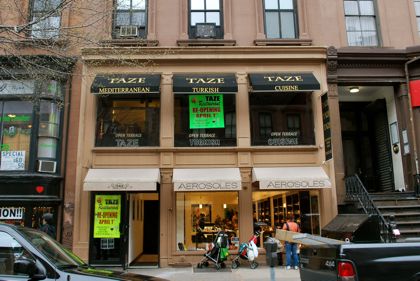 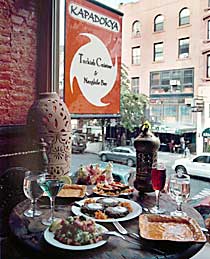