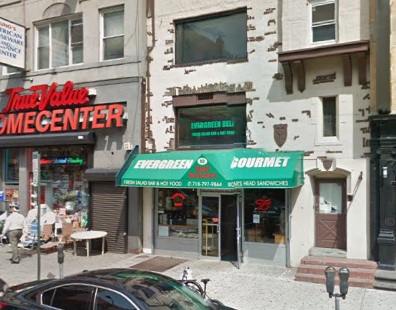 A BHB tipster told us last December about the arrival of Boneheads BBQ to 93 Court Street. While the opening has been delayed, the Brooklyn Eagle’s Lore Croghan writes a fascinating piece about how the Ditmas Park based landlords are choosing who gets to rent from them. Also in the article an update on Boneheads’ progress:

The franchisee is making “amendations” to their plan, Vendikos said.

Will it really cost $1 million to make the space that housed a deli fit for use as a restaurant, as a source suggested? “I wouldn’t know one way or another,” he said.

We called Boneheads’ Atlanta headquarters and one of the Brooklyn franchisee partners to ask for a revised timetable for their Court Street restaurant.

“I can tell you that Boneheads is still planning on going into the space,” said company publicist Kelly Ronna. “Unfortunately, the franchisees ran into structural problems, which has caused construction to be delayed.”

A BHB tipster shares that the space at 93 Court Street—formerly Evergreen Deli—is soon to be opening as Boneheads Restaurant. The chain originated with chefs from South Africa and Atlanta, and specializes in grilled seafood dishes “in a casual, but fast setting.” It currently has locations in Atlanta, Memphis, Charlotte and Lake Forest. This is its premiere NYC location.