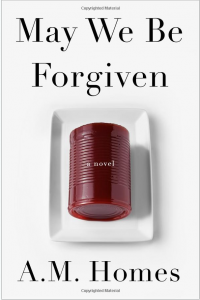 Sometimes a novel picks you up and holds you tight until you finish it, and “May We Be Forgiven” by A.M. Homes is one of those books. It’s a fast-paced story of a year in the life of the Silvers, a seriously dysfunctional extended family.

Harry Silver, the older and less successful of the Silver brothers, is a Richard Nixon scholar who has a non-tenure track teaching job. In his spare time he works on his magnum opus about Nixon. He and his wife, Claire, have no children. George Silver is the younger and more successful of two brothers. He and his wife, Jane, have two children, Nate and Ashley – both of whom have been placed in boarding schools at an extremely tender age. Here’s how Homes describes them at the Thanksgiving dinner that starts the year:

They were absent children, absent of personality, absent of presence, and, except for holidays, largely absent from the house. They had been sent away to boarding schools at an age others might have deemed too young but which Jane had once confessed was out of a certain kind of necessity–there were allusions to nonspecific learning issues, failure to bloom, and the subtle implication that the unpredictable shifts in George’s mood made living at home less than ideal.

George’s mood. Though he is the younger brother, it is George’s mood, mostly dour, and his behavior, generally bullying, that drive the family dynamic. Until George’s behavior drives him, quite literally, into another car, and death, destruction, and change follow. I won’t (well, I can’t) summarize the plot, but as a result, Harry becomes the guardian of the children. He also winds up taking care of the dog, the cat, the house, the garden, and assorted other people.

Over the course of the year Harry earns the affection of the dog and countless humans, manages his brother’s affairs, engages in sexual shenanigans, oversees a bar mitzvah in a village in South Africa, and generally copes. Oh, and meanwhile he’s editing a series of previously unknown short stories written by none other than Richard Milhous Nixon. A lot of hilarious but unlikely events happen in this book, and I was completely willing to suspend my disbelief. In the end, Harry learns quite a lot about himself, his family, Richard Nixon and, not least, that it’s okay to muddle through, even though kids don’t come with operating instructions.

This is a perfect book for the beach, a long plane ride, or a convalescent. What’s your take on the least unlikely of all the possibilities set out here? Let us know in the comments.

Have a book you want me to know about? Email me at asbowie@gmail.com. You can read my blog about metrics on my website, asbowie.net.