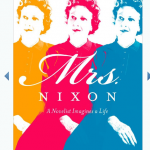 What to make of this curious book, Ann Beattie’s beautifully written new release? There’s clearly a lot of imagination at work here, and the work is based on significant research. But, Beattie points out, “[B]ooks are always about the author, however well or badly hidden, as well as being about the books’ subject.” Beattie uses her various motifs–nicknames, dialogue, character, description–as jumping-off points for writerly exegeses. The book carries as its epigraph an anecdote about the 1960 Nixon campaign bus leaving Mrs. Nixon behind, and then raises questions. Did the need to collect Mrs. Nixon irritate the candidate? Were there repercussions for the staffer who told the driver to move out? What did Mrs. Nixon have to say about it? Whether Beattie answers the questions she raises, or even intended to answer them, is another story.

There’s no plot to summarize. Beattie first lists “Mrs. Nixon’s Nicknames, Including her Code Name as First Lady,” then goes on to tell a story about her uncommunicativeness during the 1968 presidential campaign, but suggests several possible lines of what she might have been thinking. The next chapter is an extended discussion on the importance of stories in conveying a character, as if Beattie were synthesizing several of her best lectures. Other scenes—Mrs. Nixon’s mother’s early death, Pat Nixon’s community theatre experiences—are jumping off points for further discussions of writers and writing. When you think about it, the arrangement makes sense. It’s just that it tells us more about Beattie than about Mrs. Nixon. And that, ultimately, is the point.

So the book is a little bit of memoir, a lot of reflections on writers and writing, and some fictional interpolations. In her introduction, Beattie says, “I imagine dialogue to which I had no access . . .In some cases, factual events are used only as points of departure, which should become clear; those times I write fiction will be recognizable as such.” Well, not quite. In my favorite episode, My Meeting with Mrs. Nixon, Beattie describes a perfectly plausible chance meeting in the shoe department of Woodward & Lothrop.

The Vietnam War was going on and on and on. That totally left my mind, that day. There seemed no larger context than Mrs. Nixon and Tricia and their coats and bags and . . . the fact that she was trying on the same shoes I was! These were not Mrs. Nixon shoes . . .

“No?” she said, turning her foot sideways.

She was speaking to me. And I was sitting there with the same shoes on both feet, not standing to try them out because I was so mesmerized by her.

“We wore these in the forties, didn’t we?” she said to my mother.
. . .
A Secret Service agent picked up Tricia’s bag. Tricia looked at him briefly, wondering if he was hinting that they should leave. He stood there with the bag. Then Mrs. Nixon noticed what Tricia was noticing while at the same time noticing that we, too, looked at him, puzzled. And then all four of us smiled, understanding that this was a man who’d had enough of shopping. He just wanted to go.

It’s plausible, two women shopping with their daughters. It’s set just long enough ago that even though you think that the Secret Service would shut down the entire store now, then they might not have. There are a lot of details. And the bonding of the four women over the impatience of the male Secret Service agent is brilliant.

Except that the next chapter is headed “I Didn’t Meet Her.” And begins: “But you wanted me to have met her, didn’t you?” And she’s right, I did. That playful, feminine story humanized the silent Mrs. Nixon in a way that nothing else I’ve read or remember really has. It’s a useful lesson in critical reading and successful writing.

Mrs. Nixon remains an enigma at the end of the book; Ann Beattie less so. Do you agree? Let us know in the comments.

Have a book you want me to know about? Email me at asbowie@gmail.com. And check out my metrics blog.