Brooklyn Bugle Book Club: “The Good Doctor: A Father, a Son, and the Evolution of Medical Ethics” by Barron H. Lerner

As Barron Lerner demonstrates in his clear-eyed and loving memoir “The Good Doctor,” the practice of medicine has changed dramatically over the course of our lifetimes and those of our parents. When Philip Lerner, Barron’s father, was training to be a doctor in the mid-to-late 1950s, antibiotics were relatively new and the polio vaccine had yet to be developed. Doctors knew best, they made decisions autonomously, and often withheld information – particularly when the diagnosis was cancer – from their patients. By the time his son Barron Lerner was trained in the 1980s things had changed dramatically: resident training hours were limited, new technology such as CT scans and MRIs was becoming available, and patient autonomy was central to practice.

That’s not all that changed. The epistemology of medicine was evolving, too. High-powered computers made large statistical studies possible, and they replaced the small retrospective studies doctors like Philip Lerner had published. Some of the consequences of mid-century medicine, like the emergence of drug-resistant bacteria, were becoming evident as well. By looking in some detail at the life of his father and his own professional history, the doctor and historian Barron Lerner charts the sea change the practice of medicine has undergone in the past half-century or more.

But he does more. Philip Lerner published studies in journals, brought his teenaged son to the hospital, and left detailed journals. Drawing on all this information Barron Lerner found himself at times horrified and flabbergasted at some of his father’s actions. He opens the book with a dramatic scene: Philip Lerner, a senior infectious disease consultant, entered the room of a dying patient. The patient did not have a do-not-resuscitate order, but Dr. Lerner stated that no resuscitation should be performed. The nurses called in the order anyway. Dr. Lerner returned to the bedside and

placed his body over the patient, deliberately blocking his colleagues and foiling their desperate attempts to perform CPR. Despite their frantic objections, he stayed in place for several minutes, until they finally gave up.

This incident occurred in 1996. It’s one in a line of incidents that Barron Lerner relates, illustrating his father’s independence of mind. Philip Lerner was an example of what was worst and best about mid-century medicine. He was a distinguished and caring doctor who was a superb diagnostician and beloved by his patients, as many of them told Barron right after his father’s death. Philip Lerner was trusted by his family, too, and managed the medical care of many of his older relatives – something now regarded as a poor practice. Philip Lerner, child of working class parents, was very grateful to his grandfather’s foresight in emigrating from Poland in the early part of the 20th century, saving the family from likely extermination during the Second World War. He became a doctor to serve his community.

The son’s slow realization that his father’s paternalistic yet humanistic approach to his patients was in many cases prescient provides the book’s compelling narrative arc. One of the many interesting discussions is about the use of advanced technology to prolong the lives of dying patients. Philip Lerner appears to have believed, consistently and ahead of his time, that their use is not always a good thing – and that the fact that a DNR order is not in place is as much a failure of education efforts as anything else. What changed around him was the medical profession’s view of the ethics of the situation. On another topic of interest now, Phil Lerner was an early proponent of developing a meaningful way of organizing automated patient data, including lab reports. (If you haven’t yet read James Fallows’ thought-provoking series of blog posts on the irritating delays in developing electronic medical records, you can start them here.) It would be nice to think that the tide is at last turning.

“The Good Doctor” is part history, part loving if conflicted memoir and all of us, doctors and patients, should read it for its thought-provoking descriptions. What issues resonate most with you? Let us know in the comments. 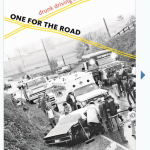 Barron Lerner, MD, author of “One for the Road: Drunk Driving Since 1900″ will be discussed the book on “All Things Considered” this afternoon. You can read my review of the book here. It’s a very thoughtful book, and you may listen to the interesting interview here.