In the middle of 1985, the Beastie Boys were on the precipice of breaking big. The “Rock Hard” single was getting a lot of attention, License to Ill was soon to be released, and the band had just been invited by Madonna to be the opening act on her Like A Virgin tour, Madonna’s first tour as a national arena-act. By this point, I had known the Beasties for almost four years; I have detailed this elsewhere, but I had been integrally involved in the beginning of their career, given them their first radio airplay, gotten them their first gig, etcetera.

The Beastie Boys and Rick Rubin (second from left) around the time this story takes place. In 1985, Rick wanted me to temporary take his role as DJ in the band.

Also at this time, I was a close friend with Rick Rubin, and Rick and I frequently discussed Beasties strategy. In fact, around this time Rick, a TV writer named Mike Dugan, and I were tossing around ideas for a Beastie Boys movie (it was a variation on the standard guys-who-need-to-stay-in-haunted-house-to-inherit-money plot; it was going to be called The Beastie Boys are Scared Shitless, and that incredible title alone would have made it instantly superior to all other films of that milieu).

In 1985, I was working with MTV News, in their music news department. We generated music news copy that was read, with relative degrees of competence or indifference, by the original MTV VJ’s (Martha, Mark, JJ, Nina, and Alan). There were five or six of us newswriters in a medium-sized office/bullpen; we spent our days talking to managers and publicists and rapping out 60 word stories about upcoming Scorpion tours, occasionally slipping in items about Fela or Robyn Hitchcock to amuse ourselves. It was a delightful place to work. A fellow named Doug Herzog ran the Music News department. He was a truly spectacular boss who was extremely tolerant of my extracurricular interests. These involved not infrequent touring with the Glen Branca Ensemble (I was a permanent member of the group from late 1983 to mid 1986), nightly rehearsals and numerous gigs with my own band, Hugo Largo, and creating elaborate hoaxes that usually involved the office Xerox machine and near-criminal abuse of the concept of the inter-office memo. 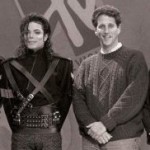 Doug Herzog, my wonderful boss at MTV. Doug is the one on the right. Doug is thinking “This is kind of cool, but I’d much rather be standing next to The Mad Professor.”

One day, Rick Rubin asked me to meet him for dinner. Rick and I saw each other fairly often, so there was nothing remotely off about this invitation. We would usually discuss grandiose concepts to take over the music industry, sometimes involving an idea we had for a super-aggressive, super-political hardcore metal/punk band that was to be called The Jews. Rick was reading a lot of Meir Kahane in those days, and around this time he solemnly presented me with a copy of Kahane’s Time To Go Home. The idea of integrating that kind of philosophy into punk rock intrigued us.

We met at a Chinese place Rick favored on University Place, where he always ordered the General Tso’s chicken. Rick told me that the Beasties had definitely decided to do the Madonna tour, and that this was a huge break for them. He then patiently explained that the Beasties were still kids, and a little bit out of control; Rick added that he was too busy to go on the road with them, and that he needed someone he trusted to keep an eye on them.

It did make a little sense that Rick would ask me to be a tour manager; the Beasties liked me, and I had some experience with touring (both due to the time I had spent touring with Branca, and because I had spent a lot of time on the road with different bands when I was a journalist — I had worked actively as a journalist from 1978 to 1983). Rick was also well aware of my connection to MTV News, and I am sure he thought that it would help to have an MTV employee actively involved with the Beasties.

However, what Rick asked me next surprised me.

“The band also needs a DJ,” he explained. “So I want you to tour manage and be on stage with them as a DJ.”

Despite the fact that I had DJ’ed extensively at clubs in the early 1980s, I had never done any sort of rap/scratching DJ’ing before. I told him I didn’t think I could do it.

“Not a problem,” Rick cheerfully answered. “I can teach you everything you need to know in an afternoon.” 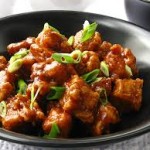 General Tso’s Chicken, a favorite dish of Rick Rubin in the mid-1980s.

I was definitely intrigued. Every 23-year-old has to dream, at some point, of going on a big rock’n’roll tour (Hugo Largo, at that point, were just playing small-ish clubs and performance art spaces). At rehearsal that evening, I told my band about it, and they seemed sufficiently amused by the whole idea, and didn’t think that the time away would hurt us too much. So I was inclined to take the gig, but didn’t know how it might affect my job. Somehow, because Doug had allowed me a week or ten days off here and there to tour with Branca, I though he might be amenable to working something out, especially because Madonna was involved.

The next day, I spoke to Doug. Doug’s office was attached, via glass wall, to the main newsroom.

Doug patiently listened to me. He then courteously but firmly explained that he didn’t think he could hold my job for the six or eight weeks I would be away. Now, I was making fairly decent money at MTV News — in fact, it seemed like a LOT of money for a musician who lived in a $475 railroad flat in Hoboken — and I also quite liked my job there. Doug, sensing my confusion, then told me “Look… it will almost certainly cost you your job here, and what will you get in return? Okay, maybe you’ll get to see Madonna’s tits, and you’ll probably have a good time, but Tim, remember…there are no Xerox machines on a tour bus.”

Then, with exquisite timing, Doug held up my most recent artfully honed piece of hoaxery: A picture of a baseball team, each face carefully replaced by the face of grotesque child star Mason Reese, along with an accompanying fake memo asking people to join the MTV softball team. This has appeared in the mailbox of every employee at the entire network.

I agreed to stay, and didn’t leave MTV news until I went full time with Hugo Largo about a year and a half later (I had a later stint with MTV after Hugo Largo’s defenestration in mid 1989, but that’s another story).

So, sadly, I didn’t become a temporary Beastie Boy. 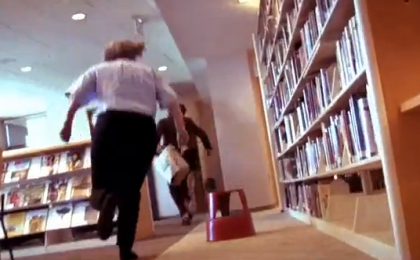 The Mike and Duane Show, based out of a co-ed private school in Chicago, is known for their annual wacky takeoffs of video classics. Their latest release is a version of the Beastie Boys’ legendary video ‘Sabotage’ featuring librarians.

However, there’s one more very subtle Brooklyn Heights connection in the video – can you name what it is?