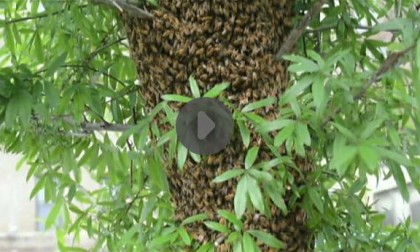 Downtown Brooklyn had one honey of a sting operation last week. Some 20,000 honeybees swarmed a tree on the southwest corner of Hoyt and Schermerhorn streets at the entrance to the A/C/F subway line—a mere three blocks from Brooklyn Heights.

Officer Anthony Planakis, the NYPD’s special beekeeper—known as “Tony Bees”—says that the horde, which gathered around 3 p.m. last Friday, is among the largest he has ever seen. There were so many bees that he couldn’t hold them in one pail, and had to call for backup. The phenomenon was first reported by DNAInfo.com here.

New York City’s board of health lifted a ban on beekeeping in March 2010, legalizing the avocation for many who had flouted the law and tended bees for years, according to the WSJ. That move, however, requires local beekeepers to register with the Department of Health and Mental Hygiene and follow practices of controlling bee swarms and making sure hives don’t bother neighbors.

Remarkably, no one was injured during the Downtown sting operation.