With their respective swearing-in ceremonies on New Year’s Day at City Hall, two Brooklyn politicos ascended to the peak of New York City government: Mayor Bill de Blasio, who hails from Park Slope, and Public Advocate Letitia James, who lives in Clinton Hill, a community she represented on the City Council for the last 10 years.

The “Brooklyn in the House” sentiment was displayed early and often throughout the day’s festivities. A large contingent from the borough made the commute to City Hall Park to join the assembled throngs grooving to the sounds of Alicia Keys/Jay Z’s “Empire State of Mind,” while the Mayor-elect and his family disembarked at the MTA’s Brooklyn Bridge/City Hall station, unmistakably suggesting that the new mayor is both a son of Brooklyn and a man of the people, riding the subway like millions of other New Yorkers.

The inauguration capped a stunning reversal of fortune for Mr. de Blasio, who, as little as four months ago, was given long odds on capturing the Democratic mayoral nomination. With an introduction by former President Bill Clinton, who stated that he shared Mr. de Blasio’s desire for a city that offered all its residents “shared prosperity, shared opportunities,” New York City’s 109th mayor—and first from Brooklyn since Abraham Beame—lauded the city’s rich progressive history that informs his thinking.

Promising that “The spark that ignites our unwavering resolve to do everything possible to ensure that every girl and boy, no matter what language they speak, what subway line they ride, what neighborhood they call home—that every child has the chance to succeed,” de Blasio laid out an agenda that was both ambitious and a dramatic departure from the policies of his outgoing predecessor, Mayor Bloomberg.

Mayor de Blasio was measured in his inaugural speech, but he firmly outlined the themes that have elevated the former New York City Councilmember and Public Advocate to the highest ranks of progressive politicians.

In declaring that a de Blasio administration won’t wait to attack the inequalities present in what Harry Belafonte in his opening remarks termed a “Dickensian justice system,” the new mayor promised to expand paid sick leave, find funding for universal pre-school education for children as well as after-school programs for middle school students, and reform controversial stop-and-frisk policies that fall disproportionally on African-American males.

Quoting iconic Mayor Fiorello H. La Guardia, the “Little Flower” beloved by Progressives, Mr. de Blasio countered the conservative ideology of trickle-down economics epitomized by the notion of the “rugged individualist” making his own success: “I, too,” said La Guardia, “admire the ‘rugged individual,’ but no ‘rugged individual’ can survive in the midst of collective starvation.”

Mr. de Blasio also cited Jacob Riis, Al Smith, Franklin Delano Roosevelt, whose Bible he swore the oath of office on, Roosevelt’s wife Eleanor, and others as “New Yorkers who challenged the status quo, who blazed a trail of progressive reform and political action, who took on the elite, who stood up to say that social and economic justice will start here and will start now.”

In closing, the man who is mayor of America’s largest city and is now clearly identified as progressivism’s standard-bearer promised that “… no matter what your story is—this is your city. Our strength is derived from you. Working together, we will make this One City. And that mission—our march toward a fairer, more just, more progressive place, our march to keep the promise of New York alive for the next generation. It begins today.”

In her inaugural speech, Ms. James, the first woman of color to hold city-wide office, was emphatic regarding her Brooklyn roots. She was prominently accompanied by Dasani, the petite heroine of the recent New York Times series about one family’s profound challenges in the NYC homeless shelter system. Dasani—who gained national prominence as a result of Andrea Elliott’s reporting—held the Bible that Ms. James was sworn in on by the Reverend Anthony Trufant of Emmanuel Baptist Church in Clinton Hill.

In her remarks, Ms. James was scathing in her assessment of the previous administration’s priorities, advocating “government that cares more about a child going hungry than a new stadium or a new tax credit for a luxury development ”—a clear repudiation both of the multiple sports stadiums (three) that were constructed during the Bloomberg years and the deplorable state of affairs in the NYC shelter system that resulted in Dasani and her six siblings and parents living in squalor at the Auburn Family Residence, a dilapidated shelter in Fort Greene.

Stating “This is the spirit of our city … New Yorkers get up each day and fight and when they’re knocked down they get up again and fight some more,” Ms. James added that “This is the tenacity it will take for our government to strike a blow against inequality and injustice and make our city work for working people again.”

The city’s new Public Advocate brought the house down with a brash Brooklyn warning of the consequences of New Yorkers not working together to create a more progressive and equitable vision for their city. “Of course, if working people aren’t getting their fair share, if our government isn’t securing the reforms New Yorkers were promised, you better believe that Dasani and I will stand up—that all of us will stand up—and call out anyone and anything that stands in the way of progress.”

Certainly that’s a message that resonates with all inhabitants of New York City, including those native to the home to its most powerful politicians.

On Monday evening, May 6, the Brooklyn Heights Association, the Park Slope Civic Council, and several other neighborhood civic groups, are co-sponsoring a Mayoral Candidates’ Forum to be held at Congregation Beth Elohim, 274 Garfield Place (at Eighth Avenue), from 7:00 to 9:00. All interested voters are invited, and no RSVP is necessary. You may submit questions for the candidates to Google Moderator. All mayoral candidates announced to date–Sal Albanese, Adolfo Carrion, John Catsimatidis, Bill de Blasio, Joe Lhota, John Liu, George McDonald, Christine Quinn, and Bill Thompson–have been invited. 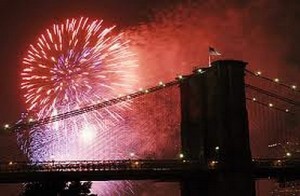 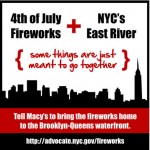 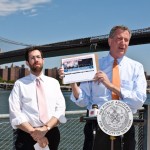 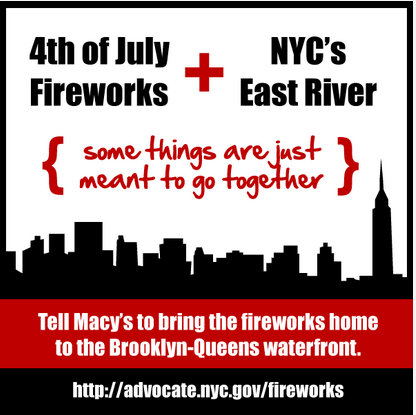