It’s 9 O’Clock. You Know Where Your Storm Center Is? 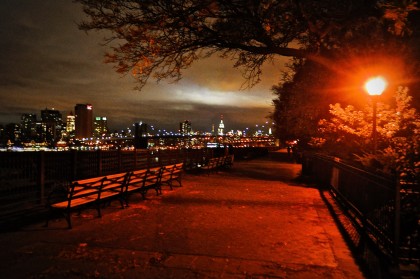 The waiting continues, as Hurricane Sandy continues barreling Northeast, with “unheard of” winds already reaching 75 mph. The storm is moving 15 mph, and could make landfall anywhere between Sandy Hook, N.J., and Delaware. “Once it arrives, a high-pressure system will have the effect of a cork in a bottle, sealing the storm in the area so it can’t escape,” reports CBS 2

Meanwhile, the BH Promenade is eerily quiet and virtually deserted, while the BQE was spooky desolate, as area residents hunker down for predicted rains of 5-9″ and sustained winds of 40 mph, with gusts up to 80 mph, which could persist for up to 36 hours. Quinn says, “It’s like giving this storm a Monster energy drink.” 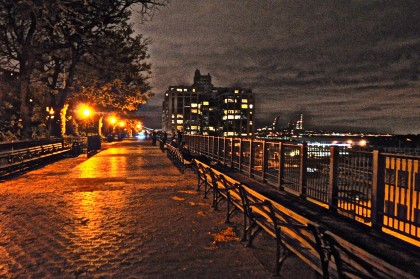 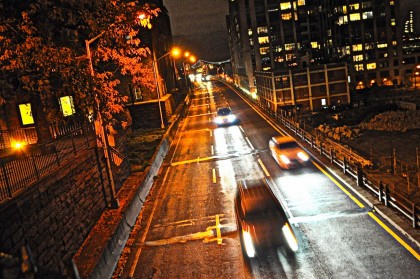 According to DNAInfo.com,
the BQE currently creates a divide between Brooklyn Bridge Park and the shopping strip on Atlantic Avenue. Josef Szende, executive director of the Atlantic Avenue BID believes that because of a lack of signage, pedestrians at either location have little knowledge “that there are opportunities on either side of the tunnel.”

Szende adds, “The underside of the BQE is an unpleasant place to be or to walk through. We want pedestrians to feel there’s something interesting or interactive all the way down Atlantic Avenue to Brooklyn Bridge Park.”

To gain funding and support, the Atlantic Avenue BID is applying for an NYC Department of Small Business Services BID Challenge Grant, which would provide $75,000 toward the project. Earlier this month, the BID met with urban designers of Planning Corps, a volunteer group helping non-profits plan and resolve design issues, and to brainstorm ways to make the tunnel under the BQE more interactive, appealing and useful to pedestrians passing through. 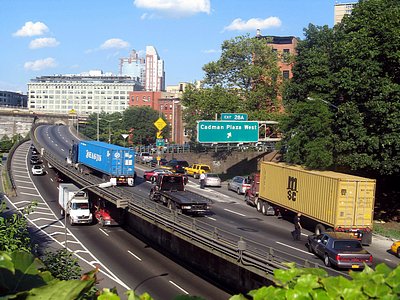 We received notice from Notify NYC that the eastbound BQE (southbound as it passes Brooklyn Heights) is blocked near the Brooklyn Bridge because of an overturned tractor-trailer. When we arrived at the sidewalk overlooking Hillside Park at about 5:45 p.m., this is what we saw: an upright but apparently disabled tractor-trailer in the left lane; a flatbed parked behind it; a red car stopped in the right lane; and a policeman directing all traffic onto the Cadman Plaza West exit.

As of 7 p.m., WINS-AM reported that eastbound lanes remain closed as wreckage has yet to be cleared from the road, while traffic is backed up all the way to Bay Ridge. (Photo: Claude Scales)

Update: The eastbound lanes are now open. There’s a photo on Gothamist of the overturned truck further down the BQE that caused the blockage here (thanks to readers Bloomy and Joe).

An anonymous “Concerned Resident Of Brooklyn Heights” is circulating a proposal to lower the speed limit for large vehicles on the BQE under the Promenade “in order to significantly decrease traffic‐induced vibrations in buildings, a major complaint of local residents.” The author asks that neighborhood citizens and their representatives petition the Department of Transportation.

Specifically, he or she proposes that the clip of I-278 between exit 27 and 29B be reduced to 30 mph for Class 3 vehicles and above (buses, tractor trailers, pickups, vans, campers, motor homes, etc.), noting that “poor road conditions and the speed of large vehicles on Interstate 278 through Brooklyn Heights has a significant impact on the quality of life, specifically when it comes to vibrations in buildings. Resident complaints are rampant as described in The New York Times and Brooklyn Heights Blog.

“Logically speaking, vibrations make it more difficult to live in the neighborhood, rent properties for higher rents and sell properties at higher prices. It also increases maintenance on historical buildings,” the letter states. “Maintenance on the road is carried out occasionally but the fair conditions only last a short period of time before large vehicles pound the roads back into disrepair. Insignificant budgets and an increase in the weight of vehicles over time are compounding the problem. Residents and even those very motorists are affected emotionally and monetarily.”

The “Concerned Resident” suggests that the “easiest, lowest-cost solution” is to lower the speed limit for vehicles FHWA class 3 and higher to a reasonable 30 mph from exit 27 to exit 29B, “resulting in an estimated 2.4 minutes of extra travel time for those vehicles and a significant decrease in building vibration.”

An Institute for Research in Construction study by the National Research Council of Canada is June 2000, is cited, which notes differences in speed reduced vibrations as much as 300%.

References to the author’s claims and statistics are included in the original letter, which you can view as a PDF here: Brooklyn Heights 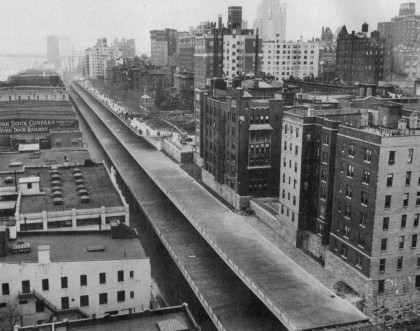 Here is a 1952 view of the incomplete Brooklyn Queens Expressway, with people on the newly opened Brooklyn Heights Promenade over the new highway. The BQE just comes to an end at the lower right corner, with the Brooklyn Bridge far in the distance. 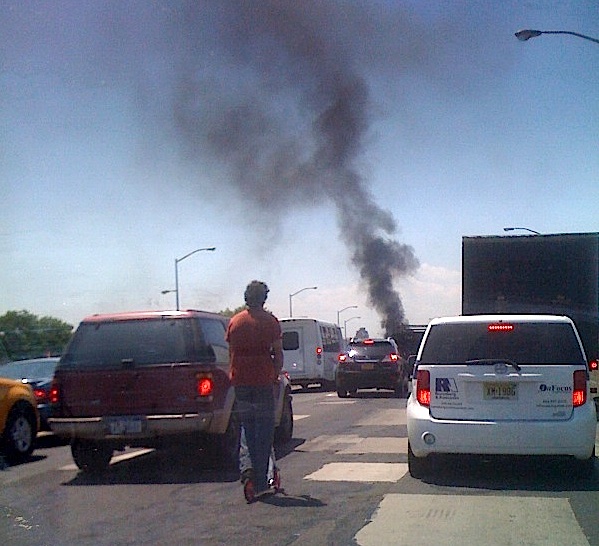 On our way back from Queens this afternoon around 1pm, we spotted a hipster on a scooter passing us on the right. Yes, traffic was crawling as usual. But still, what was a hipster (and another one ahead of him) rushing in that fashion on a major highway? 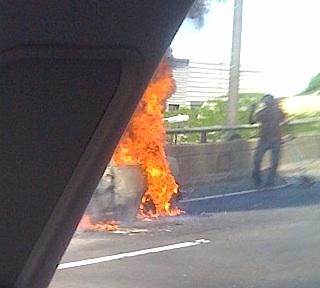 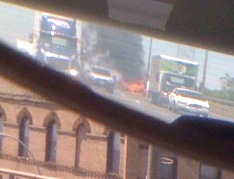 Turns out there was a car fire about 1/4 mile dead ahead of us and it appears they wanted to get some photos. FDNY was not on the scene yet but at least the two hepcats got to be the first to check-in from it on Foursquare errr sumthin’. And not for nuthin’ but if you see their pics online let us know!