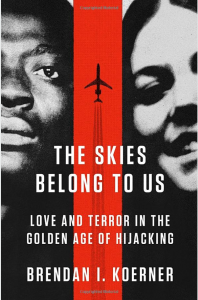 On June 2, 1972, Roger Holder, a Vietnam veteran, and his girlfriend Cathy Kerkow, an underemployed high school graduate, hijacked a plane flying from Los Angeles to Seattle. The hijacking came in the middle of what Brendan Koerner calls in his new history the “golden age” of hijacking. (You may remember D.B. Cooper, who in 1971 famously parachuted from the back of a passenger jet along with $200,000 in cash. Koerner does a very good job of explaining how unlikely it is that Cooper survived.) But there were many more hijackings – Koerner cites a figure of 159, beginning in 1961 and ending with a spate in 1972. As Koerner puts it, “The skyjackers that year were bold and foolish beyond measure, prone to taking risks that smacked of lunacy. Middle-aged men parachuted from jets while clutching six-figure ransoms to their chests; manic extremists demanded passage to war zones a hemisphere away; young mothers brandished pistols while feeding formula to their infants.” The hijackers had all sorts of motivations, and all sorts of goals.

Holder was one of the angry ones: he was angry about his treatment growing up as an African-American, angry during and after military service in Vietnam, and angry about the continuing American involvement with the war in Vietnam. Kerkow, it seems, was along for the ride. Holder was also one of the better planners among the hijackers, studying previous efforts quite carefully, and making detailed outlines. His plan was to hijack the plane, insist that Angela Davis be brought on board – the jury in her murder trial had just begun deliberating – and proceed to Hanoi and then on to a new life in Australia. (Koerner doesn’t say this was a good plan.) Things didn’t work out quite the way Holder hoped: he and Kerkow ended up in Algeria with nearly $500,000 in ransom, and Angela Davis, who had not been consulted in advance, refused to have anything to do with the hijacking. (Holder wasn’t among the most meticulous when it came to executing his plans: he brought along, and consumed several joints during the 30 or more hours the episode lasted. His decision-making suffered.) In Algeria, Eldridge Cleaver took in Holder and Kerkow. After a few months Holder and Kerkow moved on, to France, as did Cleaver. Holder eventually came back to the US and prison; Kerkow, chameleon-like, disappeared.

Koerner tells Holder and Kerkow’s story extremely well. What’s really interesting about this book is the contrast between the history Koerner provides and what he (and we) know has happened to air travel since 1972, and especially since 2001. The airlines initially resisted the idea of screening passengers with metal detectors, Koerner reports, reasoning that it was cheaper to pay the ransoms hijackers demanded and let the planes fly to Cuba than to pay for the screenings: the initial estimated cost was $300 million annually. But  screening worked: from early 1973 until the end of 1974 no planes were hijacked in American airspace. As Koerner puts it, “[t]he American public seemed to rather like hijack-free travel.” There were a few more hijackings in subsequent years, particularly in the Middle East, and then none for 10 years after 1991. So airlines continued to follow policies that had been set in the 1960s – cooperate with hijackers, and connect them with negotiators on the ground. What happened in 2001 is a different story – one you probably know.

Koerner relates an interesting part of our history, and he tells his story well. Do you agree? Let us know in the comments.