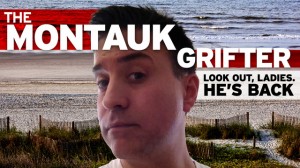 Gawker reports that Dan “Busted Chef” Kaufman is up to his old tricks yet again. Dubbed the “Montauk Grifter” by the tabloid site, Brooklyn Heights Blog readers know him well as the scoundrel who fleeced many residents with his 2008 identity theft scam based out of the Busy Chef and other Henry Street restaurants.

Reporter John Cook at Gawker reveals that Kaufman was spotted by a reader looking for love on OK Cupid:

Dan and the tipster began chatting and talking on the phone. He sent her a close-up photo at her request. (That’s it above.) It appears that Kaufman has dyed his hair, which was greying when we last saw him. He told her he was from Boston, had a sister living in San Francisco, spent summers on Montauk, and had recently returned from a three-month trip to South America (if true, he would have left just after being released from the Manhattan Detention Complex on March 2, having spent more than a month there before making bail).

In a phone conversation, he told the tipster that he worked in online advertising and had recently been at a “shoot with Lady Gaga.” When the tipster tried to Google some of those details to check him out, she found our Montauk grifter story and got in touch. In addition to the photo, she provided the cell phone number Dan E-K called her from. It matched a number we had for Dan Kaufman.