Those looking for an alternative to spending mega-bucks on a Broadway show need look no further than 3 Pierrepont Place this Saturday, as Enigma, billed as “Brooklyn’s First Outdoor Mystery Theatre Adventure” makes its debut there at noon. 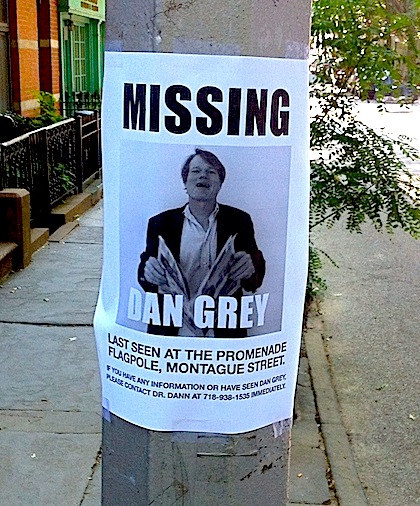 Enigma—part social theatre and part history mystery, allows audience members to embark on a journey into the heart of Brooklyn Heights, armed with a map and tasked with searching for a celebrated esoteric mystery writer. Along the way, audiences encounter dynamic talismans of the neighborhoods’ past that ultimately provide them with clues—from an encounter with the ghost of a famed Victorian-era Brooklyn clairvoyant to stumbling upon an Arthur Miller-era Marilyn Monroe on the stoop of the gorgeous Willow Street home that was the site of their torrid love affair. Throughout the performance, audiences uncover some of Brooklyn’s most notorious rogues and celebrated heroes, enlightened with the aid of a refreshing themed cocktail (complimentary with admission) from an exotic Henry Street restaurant, and simultaneously discover the hidden symbols that live within the architecture of Brooklyn Heights’ grand homes, magnificent churches, and promenades.

I spoke with Enigma’s writer, Dr. Kevin Dann, who told me that the Heights’ rich literary history and historical preservation made it the perfect place to set a show such as this. “I was a tour guide and a history professor, and I tried to make my classes feel like a grail quest … And when I moved to Brooklyn Heights, I felt like everywhere I went I was walking in the footsteps of my heroes.” You can lear more about Enigma from watching the video.

Enigma opens June 29th at 3 Pierrepont Place, and runs Fridays – Sundays through October. Performances run every half hour, from 12:00pm – 4:30pm, with a runtime of 2 hours.Tickets are $60 each and can be bought here. Group rates are available.