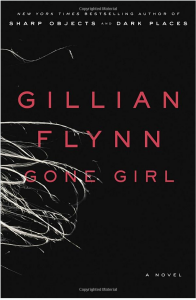 On the morning of their fifth wedding anniversary, Amy Elliott Dunne disappears from the Missouri home she shares with her husband, Nick Dunne. The living room is in disarray, with furniture that has been knocked over, and eventually blood is found in the Dunnes’ kitchen. Amy is the daughter of a pair of psychologists who have made a fortune from a series of children’s novels based on the character ‘Amazing Amy.’ Nick, a magazine writer who lost his job, and Amy moved to Missouri to help care for Nick’s divorced parents, both of whom are in ill health. Amy, a composer of quizzes and other ephemera for magazines, has been unhappy about the move, and Nick has been ambivalent, though he is very happy that he can now run a bar with his twin sister, Margo. As time passes from the day of Amy’s disappearance and she doesn’t return, the police increasingly fear foul play. And their suspicion centers on Nick.

In preparation for their anniversary, Amy set up a scavenger hunt for Nick, leading him to various places they have been together. But as the book progresses, it becomes evident that each of these clues, if that is what they are, has a double, if not downright sinister, meaning. Nick and Amy tell their story in alternating chapters (while she is missing, Amy’s story comes from her diary entries; they give us her perspective on the history of the relationship). This structure is one of the novel’s great strengths, as it allows Flynn to reveal personalities, clues, and above all reversals slowly, in a compelling way that keeps the reader turning the pages.

The structure also allows Flynn to explore the theme of roles, roles we take on, or roles that our relationships force upon us. In addition to ‘Amazing Amy’ (although her parents insist that the character isn’t real, what child wouldn’t feel she had to live up to the standard set by a fictional avatar?) Amy is also Ozark Amy, Pregnant Amy, and Victim Amy, but she is presenting herself, throughout most of the book, to just a few readers. (The diary is also a clue.) Nick is the Loving Husband, at least until the national media, including several reporters who specialize in outrage over domestic abuse, become interested in the case, when he has the roles of victim and villain thrust upon him.

“Gone Girl” is not the most nuanced book I have ever read, but the structure and story more than compensate. I particularly admired the way Flynn is unafraid to show her characters in all their human complexity and frailty, and found it to be a perfect beach book. “Gone Girl” has been described as one of the “it” books of the summer of 2012. Do you agree? Let us know in the comments.