Jesse Levitt is almost everything the owner of two hip Brooklyn bars ought to be: offbeat but serious; nerdy but good-looking; creative but down-to-earth. The one thing he lacks, almost entirely? Ego.

Seated in a wooden booth (that sometimes doubles as a stage) in his Prospect Heights watering hole Minor Arcana, Levitt, wearing a green, army-style jacket lined with outspoken pins, commanded nothing like a scary “I’m the boss” vibe on a recent Wednesday evening.  Rather than tout the success of the Coney Island-themed Minor Arcana and his other bar Kings County, in Bushwick, Levitt, who moved around a lot before landing in New York City 18 years ago, was brutally honest about the pressures of owning two bars.

“People think I sit around and drink beer all day,” he said, smiling. Minor Arcana does offer 12 brews on tap, but in reality, Levitt’s life sometimes more closely resembles that of a new parent. “You can never really 100 percent just relax, because some issue could come up at any time. I’m always on call.”

In between worrying about emergencies, Levitt manages to make Minor Arcana and Kings County comfortable, low-key, funky places to grab a drink (or four); take in a burlesque show; enjoy a 2-for-1 happy hour between 4-8pm, and also from 12-2am; or partake in a weekly trivia competition. He’s also kicking off a new party at Minor Arcana on the second Thursday of every month, called Tranz X. It will feature go-go boys and “boy-lesque” performances, and will be, Levitt thinks, one of the only bar events for the gay community in Prospect Heights.

His goal as a bar owner, he said, is simply to keep his establishments “an honest place to have a good time,” and he’s not worried about Minor Arcana being seen as one particular kind of bar or another. “If it’s thought of as a gay-friendly bar, that’s fine with me,” Levitt said.

He thinks that holding numerous events helps his bars stay relevant, and is one of many lessons he’s learned in the three-and-a-half years since he left the finance world to take over Kings County from its previous owner.

“It was like a private club for this guy and his friends,” Levitt said, noting that it has a decidedly different vibe from Minor Arcana. And though both of his bars are in up-and-coming hipster enclaves, Levitt insists he’s not riding any sort of trend. “I like this area because when I first started evaluating places, there were only half the number of bars that are here now,” he said of Prospect Heights. 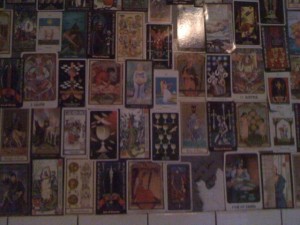 As Minor Arcana approaches its first anniversary, Levitt reflected on the run-up to its debut, and one ominous trip to a Coney Island fortune teller. “She told me not to open this place, and to hold off,” he said. “I went ahead and did it anyway.”

And did it with a Coney Island theme, to boot; not tempting fate, exactly, but rather as an homage. “Coney Island is a timeless—at least for New York City—place to go and have fun,” Levitt said.

In a way, that’s what he’s tried to create in Minor Arcana. The space is small but ample, with deep lavender walls covered by a handful of framed, retro-style Coney Island advertisements. The bathroom, adorned with rows of tarot cards, is a tribute to Levitt’s (so far) inaccurate fortune, and to the bar’s name: in tarot readings, the minor arcana cards represent the concerns, activities, and emotions of everyday life.

But the real treat at Minor Arcana is its custom-designed, shatterproof glass bar containing a series of dioramas that can be viewed and enjoyed from above. That the rotating, miniature art installations have stirred conversations and debate is no accident, because despite his passive demeanor, Levitt’s thoughtful, even-keeled fingerprint is all over his establishment.Be on the lookout for Levitt and his understated kitsch at this year’s annual Coney Island Mermaid Parade on June 18, which, as luck would have it, coincides with Minor Arcana’s one-year anniversary.

“We’re going to sponsor a float, and have an after-party at both bars, with a shuttle bus between both bars, with a bartender and go-go dancers,” he said, getting excited, both at the idea of a party and of shoving it in fate’s face.

And why not? After all, Levitt’s only regret, he says, is probably similar to that of his many loyal patrons: “Probably those times I’ve had too much to drink,” he said, soberly.