I’ve been thinking about the 1970s…specifically, about how much they sucked.

If you are too young to have truly experienced the 1970s, you probably don’t know how dreadful it really was.  History tends to be quite goddamn kind and only remember the “cool” things about the decade, and all the groovy music; I mean, when the ‘70s are discussed, it’s all about Bowie and Big Star and the Stooges and the Sex Pistols, etcetera…maybe with a gentle, ironic half-grin we add the Bee Gees and the Carpenters to the list. 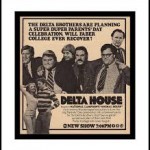 But take it from someone who was there:  It sucked.  The music was horrific; for every Buzzcocks or Can there were literally a dozen Kansas’s, Styx, Atlanta Rhythm Sections, or England Dan’s and John Ford Coley’s.  The fact that I associate the ride to Hebrew School with the song “The Night Chicago Died” probably soured me on Zionism forever.  For every sharp-witted and inventive television show like Saturday Night Live, Mary Hartman, or SCTV, there were ten Hello Larry’s or Tabitha’s, not to mention a big, steaming, coiled pile of mindless summer replacement variety shows (for some reason, The Jerry Reed When You’re Hot You’re Hot and When You’re Not You’re Not Hour is strangely absent in montages of the cultural highlights of the decade).

And people LOOKED LIKE ASS.  Important Freaking Note:  When “modern” TV shows and movies show people “dressed” like the 1970s, for some reason they almost ALWAYS have ‘em looking like how people looked like in the early/mid-1980s.  WTF, as Jefferson Davis said while Union forces captured him on a misty but warm spring morning in Irwinville, Georgia in 1865.  This stylistic wishful thinking is a constant and disturbing confusion.  That Square Pegs/Charlie Rocket/Pamela Stephenson/Downtown Julie Brown thing is a distinctly (and tragically) 1980s look, YET WHEN PEOPLE ON TV DRESS ‘1970s,’ THAT’S HOW THEY DRESS.  For fuck’s sake, it is a ludicrous distortion of the actual aesthetic misery of the time.  What people REALLY looked like in the 1970s is too unfathomable and unpleasant for most contemporary humans to even confront – in fact, it even defies description, except if you can somehow conflate Ron Jeremy with the ugliest house sound-guy you ever met.   You have GOT to remember that GROOVY LOOKING PEOPLE like Joe Strummer or Chrissie Hynde or Walter Lure or Mick Ronson or even Randy Mantooth WERE IN THE VAST MINORITY.  I mean, you were LUCKY if someone looked like Bill Macy from Maude. 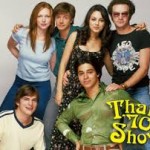 Literally NO ONE in the 1970s looked like this.

(I will note, however, that women had it a little better, and any male who survived the 1970s is likely to have fond memories of peasant blouses and leotards worn out of context.)

Now, I personally have AMAZING memories of the 1970s – Manhattan’s Soho when it was still shattered, shuttered, lit strangely golden and full of mystery; the East Village when it was still a Beat Secret; flats on Spring Street that cost $175 a month and had a bathtub in the kitchen and a bathroom in the hallway and a rock star’s name on the buzzer panel; and god knows when the music was good, it was really, really goddamn good. 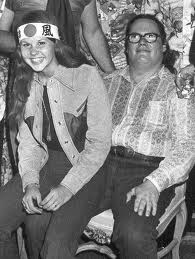 This is superstar Linda Blair and bassist Paul Goddard of the Atlanta Rhythm Section. This is a little more accurate, though to tell you the truth, this isn’t even THAT bad.

But when it was bad it was mightily, enormously bad, and yeah, me likee my Wire LPs and my Mott the Hoople records long long time but LET AN EYEWITNESS TESTIFY:  the great music of the decade was FAR overwhelmed by “Dust in the Fucking Wind” and “Carry On My Wayward Freaking Son” and the Fucking Theme From Grease.   Jesus CHRIST even the Who recorded “Sister Disco.”  If you were wandering around high school and middle schools in the 1970s, as I was, the soundtrack was not “Surrender” by Cheap Trick and “Suffragette City” by Bowie or “Dreaming” by Blondie, NO MATTER WHAT PEOPLE WANT YOU TO BELIEVE NOW.  It was fucking Carry Fucking On My Mother Fucking Wayward Son.

Now, this kind of era-distortion is certainly not rare:  the common myth that the ‘50s were all boring and virginal is total bullshit (damn, just three minutes watching Louis Prima dry-hump a stage on the Ed Sullivan Show will toss that lie out the window), and lord knows even Hogan Heroes is more historically accurate than Happy Days.  And as much as we look at the 1960s through a haze of flowers and smiley faces, during much of that decade it sucked to be African American, it pretty much sucked to be a woman, in a lot of the country being caught with one slim joint could result in you getting legally fucked for life, and half the teenagers in America lived in imminent, pants-pooping fear of being shipped off to Vietnam.  Flower Power my ASS.

Having said that, there is ONE song that REDEEMS every single excess of the 1970s; there is one single song that proudly and boldly announces “Hoorah! You have made it through that gruesome, distasteful, patchouli-and-weed-scented hirsute and sloppy, sludge-like leviathan of a decade, and here is your reward!”

And that song is “Everybody wants Some” by Van Halen.

I mean, the track is the very definition of musically and conceptually indulgent, exploitive, wasteful, and distasteful, yet it sounds more punk rock than most of the era’s more deliberately simplistic and primitive recordings (in fact, I find it slots in very, very well alongside the chunky, leaping, slurp-chord thump-punk of the U.K. Subs and Sham 69).

“Hurry Up Harry” by Sham 69 which, for some reason, reminds me of “Everybody Wants Some,” in a good way, that is.

Like a lot of Roth-era Van Halen, the band achieves a near-perfect blend of musical showboating and chordal simplicity (reminiscent of the Kinks or the Raiders) applied where it counts, i.e. underneath the melody; couple this with an extraordinary production sheen that polishes yet is so powerful it is almost disabling, and you have a song that makes you rethink everything you thought you knew about musical indulgence and high-end pop metal.

This is a song that doesn’t lie, I mean it is what it fucking is, a punk rock song about trolling for hookers played by buzzed-up nerdy alchemists, and it achieves the massively impressive trick of being the musical equivalent of driving on the 15 from Los Angeles to Las Vegas while looking at yourself in the mirror while doing 144 mph.  This is a fine fucking line, my friends; one wrong move and you are going headfirst into the World’s Tallest Thermometer in Barstow. 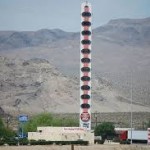 The World’s Tallest Thermometer, outside of Barstow. I dedicate this picture and its’ caption to my great friend Ace Baker.

But Van Halen don’t make that wrong move, some extraordinary inner compass (probably a blend of the essential utter simplicity of the song, Roth’s complete, absolutely gormless assumption of the horny-wolf character straight out of a Warner Brothers cartoon, and producer Ted Templeman’s willingness to let the band blow and make mistakes) keeps them heading straight through to Yermo and beyond; tribal rock drums have never sounded better (I’d have to go back to Tommy Ramone on “Let’s Dance” to find a better dumb angel drum tattoo), Edward has never struck a better balance between his tweaking histrionics and the demands of a gorgeously simple rock’n’roll chord sequence, and David goes so far in the wrong direction yet with such a ridiculous love for his audience and the character he is playing that anything he says is forgiven.

I mean, there was some very solid mainstream rock in the 1970s: Thin Lizzy, Deep Purple, Budgie, Queen, Blue Oyster Cult, and piles of others who I am considering separate from either the blue-based thing (Zeppelin), the arty-opium thing (Floyd), the proto-punk thing (Roxy, Mott) and about a thousand and eight etceteras; but when dumped into a big pile, it left a hangover that sounded a lot like eight cars in a High School parking lot playing Foghat, Montrose, UFO, and Starz at the same time. I mean, that’s not the reality, but it is the hangover.  And that hangover really, really sucked, and it basically took Public Image Limited’s Metal Box/Second Edition to clear away the emotional, physical, and psychological distress caused by the 1970s.

But “Everybody Wants Some” somehow made it all worth it.  If we had to put up with all that bullshit, all that bad hair and bad clothes and bad music and bad Nixon just to make it to the big rave-up/crash into the chord changes between the 1:10 and 1:20 mark, then I’d put up with it all again.