Memoir of a Debulked Woman 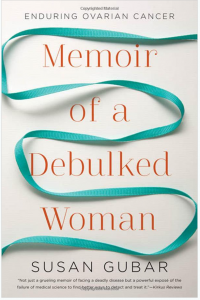 Down, down, down into the darkness of the grave
Gently they go, the beautiful, the tender, the kind;
Quietly they go, the intelligent, the witty, the brave.
I know. But I do not approve. And I am not resigned.

Indiana University English professor Susan Gubar did not quote Edna St. Vincent Millay’s poem “Dirge Without Music” in her brave memoir of her first years of living with ovarian cancer. But the tension Millay relates so vividly came into my mind as I read Gubar’s description of her efforts to face cancer and accept reality without resigning herself to fate or any other abstraction.

As Gubar explains it, ovarian cancer is a systemic disease. Originating in an organ deep within the abdominal cavity, it is often hidden, its symptoms taken to be indigestion. As a result, it is often discovered late, when it has developed into Stage III or Stage IV disease, affecting some or all of the rest of the abdomen. The initial treatment, ‘debulking surgery,’ in which the abdominal cavity is opened and all visible signs of a perhaps metastasized cancer are removed, is uncertain but likely to be horrible. Anticipating her debulking surgery, Gubar writes,

Who knows if malignancies have spread from both ovaries over the fallopian tubes, the uterus, the cervix, the appendix, the bladder, the liver, and parts of the intestines or lymph system? . . . efforts to stop the cancer’s growth require surgeons to get up the gumption to gut a seemingly vital woman, removing many of her internal organs.

At the time of her diagnosis, Gubar decides, she will go through the surgery and one round of chemo, and then seek palliative care. About half of US debulking surgeries, Gubar reports, wind up as ‘suboptimal:’ a residual tumor of more than one centimeter remains after surgery. And that’s what happened to her. But Gubar’s point is different:

Physically, immediately after the surgery I will suffer from what the counterattacking doctors do against the cancer, rather than from the disease itself. The hardly noticeable symptoms of cancer pale in comparison to those produced by the surgeons determined to excise it.

After the surgery, Gubar suffered serious side effects, including a perforated colon that developed into an abscess requiring first a drain and then a second abdominal surgery and an ileostomy – and all this during chemo. Gubar writes openly about the physical degradations and humiliations of the ileostomy, not to mention the daily challenges required to bypass the usual route of defecation, calling it ‘unspeakable and unspeakably anxiety-producing.’ She writes movingly about the impact her injured body has on her soul and her efforts to come to terms with death.

Today a number of scientists, looking for the fountain of perpetual youth, seek to make death depart from the human condition; however, it seems to me, as I now confront mortality at closer proximity, that intimacy with the mortal body educates us. Cancer and its treatments teach us, or have taught me after two years of coping with bizarre consequences, that life without the finitude of death–the inconceivable finality of one’s own death–would be intolerable.

Betrayal by her body, betrayal by her spirits, betrayal by her doctors. No wonder the thought of Judas, the subject of Gubar’s most recent book before the diagnosis, is a recurrent motif. Gubar recites poetry and prose she has loved, and thinks about the images Frieda Kahlo produced, the painting “The Dream” most of all, as she copes with all this. And she worries about the effect of her illness on her husband, her daughters and step-daughters, and her students.

Yet Gubar endures everything, and writes her book while she is enjoying – yes, that’s the word I mean – her remission. She explores the implications of her change of heart – she has decided to undergo another course of chemo after her first remission comes to a close. Her final chapter is a meditation on what she calls loconocology, “the double binds into which current protocols put medical practitioners of cancer and their patients.” She includes a plea to medical science to find a way out of these paradoxical choices, for the sake of the many women diagnosed with this disease each year.

This is a generous and full-hearted book, an anguished and powerful description of one woman’s successful effort to come to terms with a horrid reality. Medical ethicists and gynecologists must read this thoughtful book, and so should all the rest of us.

What was your response to this powerful book? Let us know in the comments.