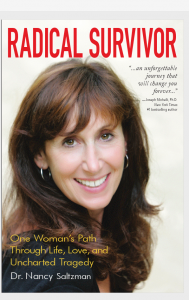 By the time she was in her early forties, Nancy Saltzman had a thriving career as an elementary school principal and lived in a happy family with her husband, Joel, and two sons. She had survived two bouts of breast cancer, and the surgery, radiation, chemotherapy, and more surgery that went with them. She was organizing support groups for women newly diagnosed with cancer, and beginning to make a name for herself as an inspirational speaker. The boys were athletes like their father, playing tennis, hockey and several other sports. Joel owned a popular tennis shop. It was a busy, full life, until it wasn’t: on September 24, 1995 Saltzman’s husband, Joel, and two sons, Adam and Seth, ages 13 and 11, were killed when the small plane they were riding in crashed.

How do you go on living when your family is killed? The first week Saltzman was busy responding to the crisis, choosing among burial options, collecting belongings, and, unbelievably, speaking at the memorial service. She writes, “I gathered strength from the thousands of people who came to mourn and celebrate those three lives with me. I wanted desperately to hold on to the Joel, Adam, and Seth I knew, and believed I could do so by talking about them.” Whether to go on living wasn’t the question. As she writes, “I dreaded the dark passage ahead, [and] I knew the only way out was through it. Normal wasn’t remotely possible, but I needed to find whatever the new version of it was.” She returned to work a week after the crash.

Saltzman describes vividly how she drew on reserves of strength, from her family, her friends, her community, and the love she and her family had shared. [Full disclosure – Saltzman’s family and my family are friends.] It’s not as if she didn’t look back. Seth had always picked out her shoes; as she got dressed she tried to guess which pair he might have chosen. She didn’t greet parents in the parking lot when she returned to work, just went straight to her office. Saltzman is honest and unflinching as she describes the difficult, pain-filled days and long nights. But somehow they passed. She shares letters that she wrote to her family, both before and after the crash, along with memories and photographs and the boys’ diaries. Her friends helped, and her dogs. She kept showing up, and in doing so, showed everyone around her what to do.

Eventually she wrote this moving book, and explains how she went on with her life. (The book provides something of a catalogue of what people say when they don’t know what to say, including pointlessly stupid and painful things.) Saltzman mixes the mundane with the morbid, and the painful with plenty of humor. Hers was a smart family, and this book is often very, very funny. After her cancer diagnosis Saltzman writes:

[W]e discovered that someone had broken into my car and stolen my radio. That night, the boys were still talking about it. I decided it was time to let them know about my surgery.

“Hey guys. I have something to tell you. I have these bad cells in my breast and I am going to have some surgery so they can take them away. They’ll have to take my breast off.” There was a pause, and they both looked at me. Then Adam realized the full extent of the injustice.

This moving book is about life, about resiliency, and about surviving. What’s Saltzman’s prescription? Well, you have to read the book, but love, kindness, and humor come in to it, along with pragmatism, and what she calls mini-vacations. Stamina and fortitude help too. And humor. Saltzman’s book is available via her website. What’s your response to this well-written book? Let us know in the comments.