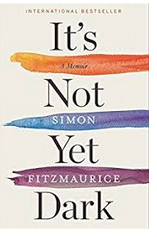 The Irish filmmaker Simon Fitzmaurice (“My Name is Emily”) has ALS – Lou Gehrig’s disease, it’s called in the US, though in Ireland it’s know as Motor Neurone Disease. He was diagnosed in 2008 at age 34. Writers often use metaphors for illness and Fitzmaurice is no exception. As a man in a wheelchair breathing through a tube, Fitzmaurice writes of himself as a stranger. Different. No longer invisible, he stands out from the mass of the well. He writes, “I frighten you. I am a totem of fear. Sickness, madness, death. I am a touchstone to be avoided.”

It wasn’t always like this for him: confined to a wheelchair, unable to move, eat, or even breathe. He was young, he was bullied, he climbed mountains. He washed dishes and got a university degree, taught English in Ukraine and got another degree. He married and had a child, then another, t hen a third. The diagnosis is devastating, tragic, and Fitzmaurice chronicles his decline from walking with a limp to manual wheelchair to electric wheelchair.

Fitzmaurice’s brain and sense of humor are intact, and parts of the memoir are hilarious. After a bout of pneumonia leaves him dependent on a ventilator (more on that below) Fitzmaurice writes of sitting in a cafe with his wife, Ruth, among other people living their lives. He, too, is enjoying being alive, not least because he’s there with his wife, who is pregnant with twins, their fourth and fifth children. He writes:

My willy works. It’s that simple.
The day I found out that ALS didn’t affect my penis was a red-letter day. Unlike a spinal injury or condition, ALS does not take away any feeling from my body. It removes my ability to send message to my muscles to move. But as the penis is not a muscle, it is unaffected.

Other parts work, too: his eyes, some facial muscles, a tiny muscle in one hand – that Ruth and the children can feel. They call it ‘imping.’

Parts are devastating. Describing running after one of his boys, he writes:

When you are told you will die within a certain period, time slows down. Life becomes dominated by the last time. . . Is this the last time I’ll be running? So I speed up. I’m running with a limp . . . And I’m remembering it. Fear of the last time is recording every second. . . [W]hen you lose something central in your life it’s important to have a memory of it.

One of the many striking things about Fitzmaurice’s story is the difference in health care provided in Ireland and the United States. Fitzmaurice contracts pneumonia, and his description of his fear as he struggled to breath is absolutely terrifying. In intensive care, just before he loses consciousness, drowning, he begs his wife, who is pumping his chest, to keep him alive. Once he’s conscious again, discussions about removing the ventilator begin. The specialists recommend against home ventilation, asking why someone would want to live dependent on a ventilator, but Fitzmaurice and his family advocate for it. They learn that home ventilation is covered by the Health Service Exchange and medical card, and Fitzmaurice has kind words for the HSE, the nurses who care for him, and the Irish Motor Neurone Disease Association. Everyone’s truth is different, Fitzmaurice points out, writing, “It’s only important that you remember that behind every disease is a person. Remember that and you have everything you need to travel through my country.

Ironies abound, starting with the cover blurb from the late Alan Rickman, calling the book (correctly) “Utterly life-affirming.” Make no mistake: “It’s Not Yet Dark” is not a feel-good book. Instead, it’s a fierce, tender, and compelling examination of what it means to live.

Have a book you want me to know about? Email me at asbowie@gmail.com.  Follow me on Twitter @abowie917.