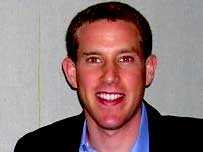 Steven Greenwood (@sgreenwood) rarely stops smiling when talking about drop.io, the two-year old, DUMBO-based company that, in a nutshell, powers content sharing online. It could be that Greenwood, who is 32, is enthusiastic about what he does as vice president of business development at drop.io, which recently spun off a service called PressLift that Greenwood created; or maybe he’s chipper because Brooklyn Borough President Marty Markowitz just announced that his office is going to start using PressLift for all of its media needs. Whatever the reason, Greenwood’s positive outlook on his industry is not only echoed by his peers, it is refreshing in an otherwise dour economic climate.

“We’re actively hiring!” he exclaimed, sitting in a Union Square diner sipping a soda on a recent evening.

Greenwood believes New York City is the epicenter of the next phase of the internet revolution. “We could not have built PressLift in any other city in the world,” he said. “We’re within a subway ride away from the top PR firms, the media companies, Madison Avenue, and big Fortune 500 companies who we can connect to in a single day.”

PressLift would not have happened without the success of drop.io, which Greenwood described as “a point of exchange on the internet.” Teachers, journalists, architects, and thousands of others use the site to create “drops,” a means of online file-sharing. The service is free up to 100 megabytes, after which point users pay for more space. 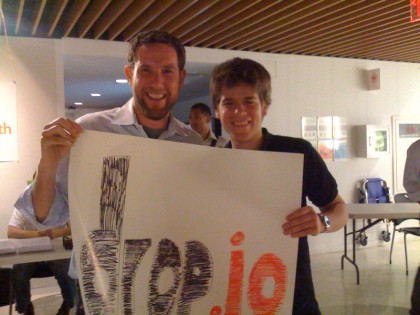 The benefit of drop.io for people working on a project together, for example, is that it streamlines communication. Instead of engaging in a long e-mail thread, each member of the team receives an alert when content is added to or changed in the “drop.”

“These are real time points of exchange,” said Greenwood, who lives in the East Village. It is drop.io’s responsibility, he added, to not only use their robust background to power content sharing, but to provide context and relevancy. “We’re building specific applications that are geared to specific users for certain uses.”

Case in point is PressLift, the genesis of which happened very organically. “Among the tens of thousands of users of ‘drops’ were communication professionals,” said Greenwood. “What they wanted to do was share multimedia with a press release—really, a very simple idea. It was actually really hard to do in practice.”

But they worked it out, creating a device for public relations professionals or press departments at places like the Borough President’s office to use to combine the text of a press release with associated video, audio, pictures, or links.

When asked why the Borough President’s office should use PressLift instead of simply creating their own page for that sort of content, Greenwood employed a helpful analogy.

“If you’re an individual company you constantly have a decision: do we buy a desk or do we build a desk?” he said. Using PressLift, which has access to the resources and talent from drop.io, is akin to buying the desk, because, Greenwood added, “We know content sharing really well.”

Greenwood sees DUMBO’s role as a breeding ground for digital start-ups much like some kids see Disney World. “It’s an area where you can imagine,” he said dreamily. “A lot of what we’re doing is trying to imagine where the future is.”

Though DUMBO is historically known for its population of artists, Greenwood doesn’t see himself or his contemporaries as all that different from their progenitors.

“This is a place that encourages and fosters ideas, and helps create this community that promotes them,” he continued. “That’s incredibly valuable, and it’s part of this ecosystem growing in DUMBO, and Brooklyn, and throughout New York.”

Drop.io will host the 15th Digital DUMBO meetup on Thursday, April 29, at their offices in, duh, DUMBO.