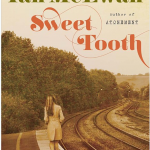 Ian McEwan’s heroine in “Sweet Tooth,” Serena Frome, daughter of an (Anglican) bishop who has earned a third class degree in mathematics from Cambridge, is unexpectedly recruited by the British Security Service (MI5). It’s the early 1970s in the UK, and the terrorist threats mostly come from Irish Republicans. Serena’s job at first mostly involves filing. She had a torrid affair at Cambridge with a history tutor, and is still recovering from the way he broke off the relationship. But eventually she is given an assignment to persuade a writer to accept money through a front agency, as part of what is essentially an internal propaganda program.

Serena is alternately dim and perceptive, self-confident and terribly unhappy. Seduction of the writer was not part of what her MI5 handlers had in mind, but the affair happens, and Serena finds herself deeply enmeshed in a tissue of lies. Since she can see her writer, Tom, only on weekends, however, Serena spends most of her evenings at home with books, Tom’s stories and other works. Serena says:

I craved a form of naive realism. I paid special attention, I craned my readerly neck whenever a London street I knew was mentioned, or a style of frock, a real public person, even a make of car. Then, I thought, I had a measure, I could gauge the quality of the writing by its accuracy, by the extent to which it aligned with my own impressions, or improved upon them. . . I was a born empiricist. I believed that writers were paid to pretend, and where appropriate should make use of the real world, the one we all shared, to give plausibility to whatever they had made up. So, no tricksy haggling over the limits of their art, no showing disloyalty to the reader by appearing to cross and recross in disguise the borders of the imaginary. . . .

This passage tugged at the back of my mind as I read the book, because for some reason Serena didn’t quite ring true. And indeed McEwan plays with the reader, showing us snippets of Tom’s stories and letting Serena analyze them. As a result, there’s a lot in the book about the craft of writing. There’s also a great deal about the writers’ marketplace, with asides about literary journals, prizes, and networking. And McEwan, even if he hasn’t put himself in the book (or has he?) does give his friend Martin Amis a cameo appearance. McEwan also violates every canon that Serena lays out in this paragraph (plus a few more I elided.)

As a spy book, it’s not nearly as convincing a story as “Trapeze” by Simon Mawer, which I reviewed here. On the other hand, it’s a completely engaging story that takes in the reader all the way up until the extremely satisfying resolution. Do you agree that McEwan has recovered his mojo here? Let us know what you think in the comments.