I do not blame Taylor Swift for embracing her role as the new face of New York City. I really, truly don’t. 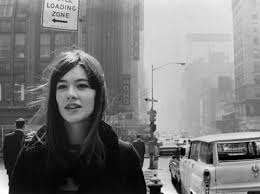 And your Manhattan will always be the best Manhattan.

But there was never one Manhattan.

And that’s not a problem. All cities change, and the cities that don’t wither and die. Any drive through the broken and boarded-up cities of upstate New York will boldly illustrate that cities were not meant to be static animals. Virtually all major North American cities are transmuting into radically altered versions of themselves (Vancouver and Las Vegas, to name two, would be literally unrecognizable to someone who hasn’t visited either place for 25 years). 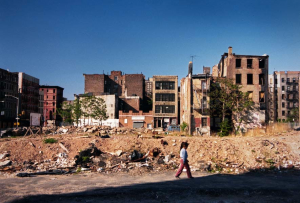 If we want Manhattan to remain a theme park to our nostalgic ideal of dive bars, dark Soho streets and an Alphabet City full of brick piles and smoking garbage cans, we are as offensive as the billionaires and elite young who we claim have “ruined” New York. We would be making the mistake of assuming “our” Manhattan was the “only” Manhattan; we would be making the catastrophic error of demanding permanence in a world that doesn’t just insist on impermanence, but functions only because of it.

We must resolve ourselves to the idea that it will never be “our” city again, the one you loved, the one you boasted you were from, the one whose angles and corners and alleys and bodegas and rooftops and pizza joints thrilled you and defined you.

It will be someone else’s city. And you can’t say, “They’re not a real New Yorker, their New York isn’t the real New York,” because it is the only New York they ever knew. It suits them. It is defined by their age, their income and their interests in much the same way “our” Manhattan was defined by our age, income, and interests. 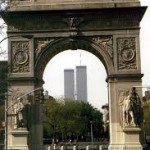 My New York was: the humid, gassy smell inside of long, narrow, parchment-brown apartment stairways; Glass always crunching underfoot (crack-pipe glass the size of sea-salt crystals, the slightly more musical pop of syringes, green beer glass, thick, fractured streetlamp glass); door-less entryways of Eldridge Street tenements lined with smashed mailboxes; the ominous gray-blue chill and silence of Union Square long after midnight on the walk back from Max’s; the warm neon lights of Dave’s on Canal Street after a loud night at the Mudd Club; late-night shuttered Soho, lit golden and spare; West Village streets on a perfectly hot summer night, swarming with strong men, smiles, and sideways glances; the thrill-rush of terror you felt when you walked past the lot on the south east corner of 42nd street and 8th avenue, across from Port Authority, smelling of piss and weed and ammonia and shoeshine polish; a downtown full of narrow stores where we spent hours dirtying our fingernails as we flipped through used records; the perfectly centered image of the twin towers through the Washington Square arch as Winter gave up the fight and sighed into spring.

Taylor Swift is an easy target right now; personally, I am not particularly negatively or positively disposed to her – I simply don’t think about her much. But I do know she is probably sincere. She probably sincerely loves New York. And her New York is an utterly different city from the city I loved, which was a pretty different city from the town Patti Smith fell in love with, and that was a pretty different place from the city Alan Ginsberg loved, which was, I am sure, a very different island than the town Joseph Mitchell fell in love with, which in turn was an inconceivably different place than the city Walt Whitman or Herman Melville fell in love with. In fact, I would be willing to bet that Peter Stuyvesant once said “New York City isn’t what it used to be,” and I am quite goddamn sure that the Lenappe Indians just wouldn’t shut up about how much their Manhattan had changed. 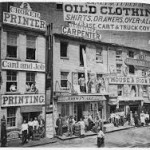 Who knows, New York City could be like “my” New York City again. If that happens (and it’s certainly possible), it won’t be pretty: the Bloomberg-dream of populating Manhattan with Russian billionaires and Taylor Swifts and eliminating the middle and lower class could lead to the shuttering of all businesses due to high rent and no consumers, and the collapse of the city from the inside. Bloomberg’s dream was to turn Manhattan island into Bahrain, with the extremely wealthy zipping out of razor skyscrapers without any interaction with the underclass; that’s happening now, but all it takes is an economic downturn, a terrorist attack, an Ebola epidemic, the disappearance of any middle class to patronize shops and restaurants, for the whole thing to cave in. Any of these factors – or, more likely, the collapse of a tax base (many of Bloomberg’s super-rich don’t have New York as a primary residence, therefore they don’t pay taxes!) could lead to a ghost town, which, in turn, could see us back into the Beame-Times in no time!

But even if that happened, New York City would still be defined by it’s newest residents, be they the young who now populate the newly exclusive Manhattan, or the young who would populate a future hell-town. In either event (or any scenario in-between), Manhattan would become their Manhattan. It will never be ours again.

Every place you ever loved will close. It’s called impermanence.

You have your memories, and the friends you shared those memories with, and the people who weren’t there who you can regale with these unique impressions of your New York City. That’s all any of us ever have, because of impermanence, the gift that gives (a world that doesn’t turn is a world that cannot sustain life) and the gift that takes away (everything we ever loved will close, everyone we ever loved will die).