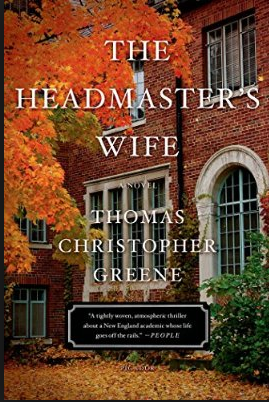 Arthur Winthrop, the headmaster of Thomas Greene’s title, is in his fifties; he’s settled, comfortable, the head of the respected Lancaster School located somewhere in Vermont. His marriage is, if not quite ending, no longer much of a marriage. At the suggestion of his board chair Arthur is teaching a literature class, returning to the classroom for the first time in years. Arthur’s father was headmaster, and he grew up in and around the school; it has been his life, and he deeply hopes it will be his son’s life as well. Arthur, like his father before him, went on to Yale from Lancaster and returned immediately to Lancaster. He married Elizabeth, his high school sweetheart; they have a son, Ethan. Arthur wants Ethan to follow his path, but Ethan has other plans.

So why does Arthur begin an affair with a teenaged (but 18 year old) student that can only end in disaster? In fact, we know it has, because the book begins with Arthur walking, naked and barefoot, through the snow in Central Park. The parent/child conflict doesn’t set off the action completely, but it’s related. What happens to the brain when life throws a set of difficult pitches provides the theme of this engaging novel. Do we step out of the way? Step into a swing? Whiff completely? Arthur and Elizabeth, between them, attempt all three of these approaches.

Arthur narrates the first half of the novel which, as you might expect given the title, is not entirely about him. Arthur describes in detail how he plans the affair, his obsession with the student, and the lengths to which he will go to make sure she remains his, regardless of consequences. The second half of the novel, told from the perspective (but not in the voice of) Arthur’s wife, Elizabeth, explains what brought Arthur to the point of breakdown. Elizabeth’s approach is equally unmeasured, but it’s the opposite of Arthur’s: she retreats deeply into herself. She lets Arthur drink, and she remains largely mute, while working out some of her issues alone, serving bucket after bucket of balls on the tennis court. For both Arthur and Elizabeth,the consequences play out while at the same time memory and reality, past and present, become conflated.

This is not a layered novel, and much of the action stays on the calm surface, with only the occasional ruffle of foam suggesting the deeper cross-currents. Greene is adept at capturing the atmosphere of an elite public school, and his use of the present tense makes the action immediate. There are many moments of accurate description. Here’s one, about Elizabeth’s tennis teacher, who is aware “of his square-jawed handsomeness and what it does to these aging, doughy, well-bred women.” Then Greene goes on:

But the truth is that behind the veneer of all that macho bravado, and the class-conscious sense he has underneath the surface that he has lived a failed life — he confesses to her once that his dream was to be a writer — lives a really good teacher.

What we want, and what we have, can be quite different, and the anguish of Greene’s characters as they struggle to cope is palpable. “The Headmaster’s Wife” moves quickly and persuasively through some fairly complex turns, though the deus ex machina ending feels contrived. Let us know your thoughts in the comments.