The House in France 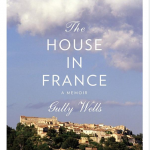 A beautiful and witty mother, a famous stepfather, literary gossip, and a sparkling style: Gully Wells’ delightful memoir has it all, along with the eponymous house.

Hers was an exciting family to grow up in. Wells’ mother Dee was a journalist who eventually wrote a best-selling novel. Wells’ parents divorced after only five years of marriage when she was quite young, and she lived with her American mother in London, spending several weeks each summer traveling with her father, an American diplomat. Her mother, a journalist, had many suitors, and eventually married the philosopher A.J. Ayer. Wells adored her step-father, though she is clear-sighted enough to agree with her mother’s description of him as an Aspergian with all the sense for the feelings of others of a snail.

It was not an easy marriage; Ayer commuted up to Oxford during the week and lived with Dee in London on weekends. Dee and Ayres produced a half-brother for Wells early on in the marriage. Ayer required a lot of maintenance, and together they enjoyed an active social life among literary and social London. Wells shared it for a long time, and describes many delicious aspects. But Wells also outlines her mother’s family history of mental illness, suggesting that her mother may have inherited a tendency towards less than optimal functioning. The house in France provided some summer grounding for the family after the busy London life of work and school. But the relationship between Ayer and Dee was tempestuous–both took lovers, and Dee’s tongue and temper sound hellish—and eventually the two divorced, though for a while they shared their old house with their new partners.

There was a lot of fallout, emotional and drug-related and medical, and a lot of neglect, particularly of Wells’ brother (Wells was at university by the time the marriage ended). It’s there between the lines of this memoir. But the joy in life, the delight in conversation with friends over good food and wine, along with the excesses (it was the 60s, after all) make for an entertaining excursion into a world now gone.

Some reviewers have allowed that they are jealous of Gully Wells’ glamorous upbringing. Do you agree? Discuss in the comments.