There is a delicious squabble going on in the webbernet:  Kinks’ guitarist Dave Davies is appropriately livid that his brother Ray has recently taken credit for the earth-changing guitar sound Dave devised for “Your Really Got Me.” Now, Dave doesn’t contend that Ray more-or-less wrote the riff; he just is alarmed that Ray is taking credit for the sound, which was as significant an element of this stunning scene-change as the riff itself. 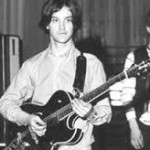 Any follower of the Kinks (especially one cognizant of the mercurial and frequently downright-unpleasant behavior of Ray Davies) is barely surprised by this most recent kerfuffle.  Without a doubt, Dave’s story is the one to be believed.  In July 1964, when Dave stuttered and distorted the bar-chord that Bo Diddley had fiddled with a decade or so earlier, he literally invented an entirely new avenue for rock music; it is one of the fundamental moments in the history of the guitar.

In any event, the whole thing got me to thinking about riffs. I have been a serious fucking acolyte and proselytizer for the Church of the Riff pretty much since the day I first heard “You Really Got Me.”  Riffs are the crosses the rock’n’roll Christ was nailed to, the stone upon which the rock’n’roll church was built.  Riffs are the raised print on the calling card of rock. Me likee riffs long time. 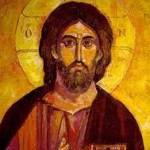 Jesus (artist’s interpretation). Somehow, he has worked his way into this discussion.

And no, I don’t consider “Louie Louie” the Baby Jesus of all riffs; in its’ first incarnations, the “Louie Louie” riff is a fiddle-thin piano plink transcribed to guitar; admirable in composition, but pale in execution, especially when held up to the Kinks sonic farts to come.  For all intents and purposes, the riff era begins in June of 1964, when Dave slugs out those hefty F-G’s.

And by “riffs,” I am talking about something fairly specific:  a sequence of bar chords played on the guitar in a repetitive fashion, with a significant element of the song introduced or sung over the chord sequence.  For instance, “Can’t Explain” by the Who is (what I call) a riff; the (nearly as arresting) “Mississippi Queen” by Mountain is not (great part, but too much single-note diddling and not enough bar chords). Likewise, the extraordinary, branding arpeggios that inaugurate “Don’t Fear The Reaper” isn’t (for the purposes of this discussion) a riff, but the slug-like bolts of armor that open BÖC’s “Godzilla” most certainly is.  And anything keyboard-driven is not up for consideration, which eliminates worthy riffs like “Tin Soldier” by the Small Faces or “Open Your Eyes” by the Nazz.

So I thought I would take the time to list my favorite riffs.  Yeah.  These are more or less in order.  Yeah.

There is so much to say about Thin Lizzy — they almost literally invented the modern day rock ballad, their influence on U2 (and all modern posture rock) is incalculable, along with Springsteen they showed their was a middle ground between proletariat crowd-rabble rousing and sensitive and credible songwriting, and Phil Lynott is one of the great rock stars of all time – but I often just prefer to think of them as the writers of the greatest riff in rock history.   It’s “Can’t Explain” re-written by Free, it’s “Gloria” running for a subway, it’s a big chunk of rubbery tuna gulping for breath between slabs of mayonnaise, it is almost dream-like in it’s weird mixture of gigantic and intimate, it is the riff’s riff.

I Need You The Kinks

After the success of You Really Got Me, the Kinks tried a lot of variations on the slurring bar-chord thing, each a little better than the one before.  This is the apotheosis; it’s as if the Kinks saw into the future they had created, and just let the beast loose, predicting the feedback howl of The Creation or Hendrix, the punk aggression of the Stooges or Pistols, and the junkyard repetition of Suicide or krautrock.

Yes, I know it’s a re-write of Sabbath’s “The Wizard,” but it’s a superior re-write, dammit, reducing the somewhat frantic jumble of the Sabbath original into a menacing slur that sounds like an eight-story Golem trashing the car-part yards that one used to find near Shea Stadium.  True, it almost disqualifies itself due to its’ single note-to-bar chord ratio, but those first three chords just announce the Fall of Man as well as anything ever recorded, so this has to get on the list.

Let’s say someone gave Led Zeppelin an IV-drip full of pure Costa Rican coffee beans, then told them to spit out a riff based on the “Odessa stairs” sequence in the movie Battleship Potemkin, with the further instruction to make it sound like “You Really Got Me” played sideways by someone describing the Running of the Bulls, and you have this strange, aggressive, gorgeous riff.  I also believe this is the only riff here that’s from an out-of-print and non-streamed record, and that’s a goddamn shame.  I will further note that if you grew up on Long Island in the 1970s, you knew this as the song in the Speaks commercial.

I Want You The Troggs

Clearly, just a re-write of the “Wild Thing” riff that had made the Troggs famous, but because they’re, well, the Troggs, they couldn’t help but make it dumber, fiercer, and more threatening (and did I mention dumber?); this is the sound of a bully stealing the meds from a school for children with downs’ syndrome and then burning the place down, and then going to fuck his girlfriend, who looks a lot like Juliette Lewis after she drank a lot of cough syrup. 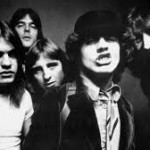 AC/DC, who are not on this list, for reasons explained immediately to the left of this picture.

Now is probably a good time to answer a question you are most surely asking:  Why is there no Sabbath or AC/DC on the list?  AC/DC aren’t here for the same reason you don’t put John Entwistle on a best bassists’ list or Pet Sounds on a best albums list: their presence is so obvious that to include them would just humble, obfuscate, clog, and complicate the completion of the entire project.  For instance, you could inarguably include at least three AC/DC riffs in the top ten – “Highway to Hell,” “Sin City,” and “TNT” — and could make a good case for including four, five, six, or seven; so if one is going to functionally complete a list like this, you have to do it without AC/DC.  Let’s just call them Lords of the Riff, and be done with it.  As for Black Sabbath, I’ll be frank:  What Sabbath did (and to a degree, invented, though the Move, also from Birmingham, seems to have dabbled with it first) was pretty freaking amazing, but their brethren and offspring actually improved on it; the stoner and doom metal movement that emerged in the late ‘80s and beyond took the Coyote Crawl of Sabbath’s slabber and turned it into Cerebus Slobbering through the sludge of Hades; basically, you can pick up any CD by Fu Manchu, Weedeater, Wo Fat, Electric Wizard, Orange Goblin, and many, many more, and you’ll see that they’ve basically bettered Sabbath at their own game.

A lot of great riffs are re-interpretations of earlier classic riffs; “Roadrunner” was a taming of the Velvets’ world-ending and feral “Sister Ray,” but they replaced the drug beast howl of “Sister Ray” with a clarity and krautrock motorik discipline, and even an overlay of Fabs/Big Star sensitivity.   It’s one of the great stompy-fisty riffs of all time, “Autobahn” transcribed by the Dave Clark 5.

It’s curious that this riff appears nowhere in Don and Dewey’s original version of “Farmer John” (a wonderful, but riff-less, dose of amphetamine r’n’b via the Everlys); I would love to know how the Premieres came up with this, and why they attached it to this song (anyone who wants to contribute some thoughts/theories, please do so).  It’s a slightly more elaborate, more syncopated, and less drunken variation of “Louie Louie,” and Neil Young did a kickass version, too, in which he underlined the proto-Sabbath slur of the riff by filling it with volume and morphine.

BÖC have the honor of being the only band represented on this list twice.  A profoundly influential riff – along with a pile of Sabbath riffs, this piece alone virtually sired Stoner metal — BÖC have strapped a standard Sabbath slur to the back of a twelve-ton slug and created a perfect personification, via guitar, of the Lizard God honored in the lyrics.

Stately, patient, majestic, instantly embracing, not so much a swagger as a confident, straight-backed march to the table that’s been waiting for you at the hippest club in the city.   Would love to know where this came from; an earlier memorable VU riff, “There She Goes Again,” was appropriated lock, stock, and barrel from Marvin Gaye’s “Hitch Hike,” but I can find no source for this.

An angry, arty, chunky interpretation of what the Who, the Small Faces, and the Move were doing, only the Creation do it perfectly.  There’s something decidedly odd about the chord selection, making me think that perhaps it was composed backwards.  It’s a shame Hendrix never covered this; there’s a deeply beautiful drunk on a tightrope snarl here that he would have nailed.