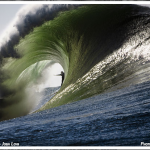 Maverick’s is a big wave formation off the Santa Cruz, California Coast, and there’s a surfing contest there every year. (If you already know this information, please forgive me.) The contest was originally organized by a local surfer, Jeff Clark. Clark was the first and, for a long time, the only surfer to ride the wave. Since the site is located half a mile offshore, in its early years the contest was organized casually, by and for the surfers, with little but glory for the winner. In the way of these things, Keir Beadling, a local entrepreneur, saw an opportunity to capitalize on the event, bringing in sponsors, and selling t-shirts and other gear to raise money for appearance fees and prizes. That kind of organization requires lots of work, and compromises with corporations. Clark went along with it, for a while. And then things fell out. “The Voodoo Wave” tells the story of what happened during the 2009-2010 contest, when Clark was ousted from the organization, but Beadling didn’t have anyone to replace him.

A bit of background. Mavericks is a coldwater “big wave.” It’s dangerous: there are rocks underwater, rocks at the coastline, and the waves come in fast, meaning that if one knocks you down, another may be coming along before you can get your head out of the water long enough to take a breath. In Kreidler’s description:

Worse, though, are the hold-downs, when a fresh wave crashes on a surfer’s head just as he is attempting to surface from his initial wipeout. Maverick’s is infamous for the length, depth, and ferocity of its hold-downs, with the cold water testing the surfer’s ability to hold his breath and the violence of the spin cycle leaving him disoriented and, occasionally, with punctured eardrums. At Mavs as elsewhere, the length of the trouble depends mostly on the period, or the number of seconds in between the waves. A two-wave hold-down is common; a three-wave hold, though terrifying, is by no means unique.

Water, wind, and wave conditions have to align before any waves at Mavericks are rideable, and then someone with an understanding of the surfers’ needs has to decide whether to hold a contest. Contestants, sponsors, and spectators need enough notice to get to the site. Before the 2009-10 contest could be held, there was a fight over who made that decision. Ultimately, the 24 surfers voted to go ahead. There were money problems–Beadling had failed to pay appearance fees in the past. (The surfers showed up all the same.) And then there was the casual approach of the surfers, who need travel time, boards and wetsuits, versus the time needed to set up broadcast booths, vendor booths, and to line up the boats that take people out to where they could actually see the waves. In February 2010, when the contest was held, the waves were big, and several of them swept through an area that spectators and vendors thought would remain dry.

As a business book, well, this one is a little disorganized. There are a lot of interesting stories here, and Kreidler sought out a wide range of perspectives, but they are not fully integrated. There are almost too many good centers for the story: Jeff Clark, for example, is an extremely complex person, calm and centered out on the water but mercurial on land. Keir Beadling is cast as the villain, but he also sounds like someone trying to bring depth of organization to what had been a spontaneous event. The other surfers seem one-dimensional, with similar easygoing personalities. The book is also marred by the occasional awkward sentence.

On the other hand, Kreidler does a great job of conveying the casual camaraderie of the big wave surfing community, and the sheer thrill of surfing huge and dangerous waves. Click here for a good explanation of why the Mavericks waves rise the way they do, and here for a list of the heats in the 2010 contest (spoiler alert: you will be able to tell who made the final round). And here is a link to some video of the contest. I list all this because I needed all of it to understand what was happening in the book. But then, I’ve only been surfing once. It was a blast–one of the most exhilarating things I’ve done in sports, even as a beginner on small East Coast waves.

Are you a surfer? Do you think the descriptions are adequate for the more expert? Let us know your thoughts in the comments.