Brooklyn Bugle Book Club: “A Visit from the Goon Squad” and “The Invisible Circus” by Jennifer Egan 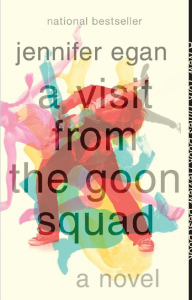 I admit to letting “A Visit from the Goon Squad” sit on my night table for several months after I bought it. “Look at Me” is a terrific book, but “The Keep” is less successful, though I admired Egan’s experiments with form. What I’d heard about “Goon Squad” was that some people loved it and some people hated it. There was no middle ground, it seemed.

Once I started it, I found “A Visit from the Goon Squad” to be a fascinating book with an expertly achieved structure. “Goon Squad” tells the story of Sasha, assistant to an aging record producer, Bennie, the record producer, and his friends. A few other people, like Bennie’s ex-wife, a publicist, and Sasha’s daughter Alison figure in it too. Told from shifting perspectives, sometimes in first person, sometimes in third, once in the second, every chapter layers what we’ve learned from earlier chapters, or colors that knowledge with depth and nuance. Sometimes the next chapter provides the adjacent narrative but other times it moves forward or back in time, or to another place entirely. One chapter is set in the future when school children are taught to write power points only. (Alison is able to convey plenty of meaning with her pauses.) The book is more complex to describe than to read, though reading it does take some concentration. It’s a good book for a plane or a convalescent (someone who’s in the second or third week after surgery).

When I finished it, I decided to read “The Invisible Circus,” Egan’s first novel, published in 1995. That book tells the story of 18-year-old Phoebe, who goes to Europe as soon as she is done with high school, hoping to find out the truth of her older sister Faith’s death. Unlike the subsequent novels, it’s a straightforward narrative, so accomplished it’s hard to believe it’s a first novel. It’s prescient, too—Egan describes the 1960s as “all about watching ourselves happen. . . This incredible feeling, standing outside, seeing the thing unfold. Like tripping. I remember thinking, Shit, this is going to be huge. Whatever it is.” It turned out to be is the publicly lived life, with social media Facebook and Twitter and Foursquare keeping everyone in the loop. (Though now that I have learned that Jennifer Egan dated Steve Jobs while she was in college, maybe she had a peek at the future. More about that next week, when I review Walter Isaacson’s biography of Jobs.)

What did you think of “A Visit From the Goon Squad”? Love it or hate it, or feel somewhere in between about it? Let us know in the comments.

Have a book you want me to know about? Email me at asbowie@gmail.com. I also blog about metrics.