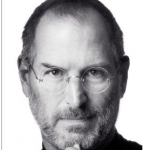 Charismatic, volatile, mercurial. Genius. These are just some of the adjectives Walter Isaacson applies to Steve Jobs in his lively and entertaining biography. In Isaacson’s description, Jobs was driven to seek perfection in his company’s products through simplicity, and ease of use through elegant design both inside and out. Jobs managed to project an aura of countercultural rebellion while building what became, just before his death in October, the most valuable company in the world. Apple product launches, and Isaacson describes them vividly, were cultural events, to the extent that Occupy Wall Street’s communications center had many Macs and the occupiers didn’t see the products of the world’s most valuable corporation as part of the same system they were protesting.

The general outlines of the story are well known. Jobs’ mother gave him up for adoption almost immediately after he was born; he was brought up outside of San Francisco by Paul and Clara Jobs. He dropped out of Reed College after a year, then, with Steve Wozniak, founded Apple Computer in his parents’ garage in 1976. Kicked out of the company in 1985, he returned 12 years later with the Pixar hit “Toy Story” under his belt, and moved from triumph to triumph: iTunes and the iPod in 2001, the iPhone in 2007, and the iPad in 2010. Not to mention the iMacs (yes, I’m using one to write this review).

Jobs was clearly not an easy man, and Isaacson documents over and over again what he calls in the introduction Jobs’ “reality distortion field”—an ability to bend situations to his very strong will. Jobs yelled, screamed, threw tantrums, told people their work sucked. He was not nice in the least. He shut down emotionally, and he perfected a stare that intimidated. “Remove and focus. Simplify.” Running the company this way served Jobs well in many circumstances—the products are the best example—but at other times may have hurt him, as he tended to ignore facts he couldn’t control, like bad news about his health.

Jobs’ insistence on making a closed product—Apple’s from top to bottom—meant that Jobs could exist happily at what Isaacson calls the nexus of technology and creativity. Jobs also controlled Apple’s board of directors. Isaacson is able to describe Jobs’ bad behavior sympathetically, making a request for an airplane instead of stock options look graceful, until Jobs asked for stock options also (he got them). Isaacson explains without justifying the backdated stock options in 2001-02. Isaacson sums up Job’s ambivalence: “Jangling within him were the contradictions of a counterculture rebel turned business entrepreneur, someone who wanted to believe that he had turned on and tuned in without having sold out and cashed in.”

Isaacson does not go into great technical detail about the development of the various electronics; he’s much more interested in the person. Jobs cooperated with, but did not try to control, this biography. Isaacson mostly stays away from the complex family life. But there’s still some romantic history. Before he was married, Jobs had a romance with Joan Baez, and another with the novelist Jennifer Egan while she was still an undergraduate. (Coincidentally, I read “The Invisible Circus” at the same time I read the biography. I kept looking for the Jobs character and eventually found him on page 332:

Barry’s office building was . . . sprawling and flat, full of glass and light and dozens of the sleek, unapproachable computers, which Barry and his colleagues handled with the same rough ease they might use to operate a sink. There was a grand piano, plus two massive refrigerators stocked with exotic juices. . . Barry’s authority seemed effortless.

Exotic juices figure in several of Isaacson’s Apple descriptions.) And a great rivalry gets its due: Bill Gates appears over and over in the book, the well-behaved older brother to Jobs’ creative and rebellious younger one. They alternately competed and cooperated, and Isaacson movingly describes a final visit between them last summer. I suspect there’s more to the Gates/Jobs story than has yet been told, but this is an intriguing beginning.

Generally following a chronology, Isaacson moves deftly to thematic discussions when necessary. “Steve Jobs” is an eminently readable biography that ably captures an era and one of its key figures.

Which Apple product would you take to a desert island (assume you can recharge it)? Discuss in the comments.