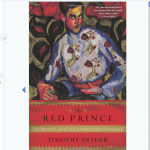 Before they became independent countries in the 20th century, Austria, the Czech Republic, Slovakia, Hungary, Bosnia-Herzegovina, and parts of Poland and Ukraine were territories, or provinces, or sometimes principalities, of the Habsburg empire. The Habsburg family was large and connected, all the more so because cousins often married. (A Habsburg sits on the throne of Spain today.) Habsburg Archdukes governed the various provinces under the Emperor. This book tells the story of one scion of the branch that governed Poland, or tried to. Wilhelm, born in 1895, rejected his father’s efforts to make him and his siblings Polish, and threw his lot in with the Ukrainians.

This was not a simple thing to do, given the complexities of 20th century central-European politics. It was a Habsburg Archduke who was assassinated in Sarajevo in 1914. Wilhelm served in the Habsburg army during that war, then became involved in Ukrainian politics, hoping to become king of an independent Ukraine. The war ended the Habsburg empire, and Wilhelm spent the interwar years in France, until he was forced to leave after a scandal, and then Austria. He flirted with fascism, and ultimately took up the cause of Ukrainian nationalism once again. After the war, once the Soviets moved in, he was arrested in Vienna and died in Soviet custody.

Snyder traces the development and clashes of nationalism, imperial ambition, religion and ethnicity, showing how they played out in Europe through the century. He makes a confusing and complex history extremely clear. Snyder suggests it is not far-fetched to think of modern Europe as fulfilling Habsburg ideas. Indeed, Otto von Habsburg, whose father was the last Habsburg emperor, was a member of the European Parliament for 20 years. He died in 2011, at the age of 98. The Central and Eastern European history before World War II was something of a blank for me, and this book does an admirable job of filling it in. Snyder’s most recent book is called “Bloodlands: Europe Between Hitler and Stalin.”

Have a book you want me to know about? Email me at asbowie@gmail.com. I also blog here about metrics.