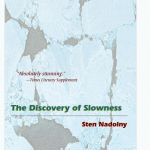 Constant connection and instant communication have embedded speed in our lives. Sten Nadolny’s wonderful novel, “The Discovery of Slowness,” translated by Ralph Freedman, celebrates the opposite: the value of taking one’s time, of stopping to think before you act or speak.

“The Discovery of Slowness,” a historical novel, tells the story of John Franklin, a 19th century Englishman who arose from humble beginnings to become an Arctic explorer and the author of two best-sellers about his trips. Reviled and bullied as a child, John also paid close attention, perfecting an ability to stand or sit still for long hours. He used those hours for thinking things through, trying to understand the perspective of others. (I had to wonder whether he would be treated as autistic, or perhaps Aspergian, if he had lived more recently.) A sympathetic schoolmaster helped him achieve his dream of joining the Navy. As Nadolny tells it, eventually Franklin rose to the rank of captain, survived a first trip to the Arctic, and became governor of the penal colony Van Dieman’s Land. He died, of a stroke, during a return trip to the Arctic.

Nadolny puts the reader inside his character’s brain for much of the novel, and Franklin puts his unusual characteristics to good use. He learned to plan for the unforeseen, and his skill at putting himself in the place of others helped when he was negotiating with Inuits during his Arctic trips. His ability to anticipate orders was uncanny, and saved his ships from rash decisions by more senior officers on several occasions. Nadolny describes his thought process, and the impatience of those around him, in exquisite, tension-inducing detail. Here’s a moment when a party is disoriented in the Arctic:

John ordered the men to build an emergency shelter out of ice plates. Reid made no bones of the fact that he would have preferred to go on simply at a right angle to where they had been walking.

“We’ll stay warm that way, and we’ve got to arrive somewhere.”

“I take my time before I make mistakes,” Franklin countered amiably. He ordered them all to wrap themselves up as warmly as possible and sit around the oil lamp. The muskets were carefully loaded in case a polar bear might drop by.

John crouched and reflected. Whatever the other put forward–proposals, theories, questions–he only nodded and thought some more.

. . . But John still wasn’t ready. There was no reason to end his reflections prematurely, even if death was at the door. Finally he got up. . . . “fire a musket every three minutes, thirty times all told. After that, fire every ten minutes for three hours; after that, once an hour for two days. Please repeat.”

“Possibly. But until then we fire. Please confirm.” . . . Just as nobody counted any more on getting an explanation, John said: “The entire ice field is turning around. It’s the only solution . . . “ Four hours later they heard a faint shot in the fog, and then again and again answers to their own shots . . .

This Franklin developed into a gifted leader of men, particularly during the ravages of an Arctic winter. He was also a humane governor of Van Dieman’s Land, ensuring that what was a hierarchical penal colony could begin to transform itself into the Australian state of Tasmania. This is a book that amply repays the reader who takes the time to read, think about, and absorb it.

Brooklyn Bugle Book Review: “The Egg and I” by Betty MacDonald