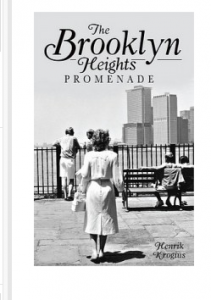 Brooklyn Heights residents are justly proud of our Promenade overlooking New York Harbor. Cantilevered over the Brooklyn-Queens Expressway, it offers stunning views of the harbor, the Statue of Liberty, and Brooklyn and Manhattan Bridges, the Manhattan skyline, and Brooklyn Bridge Park. But the origins of the Promenade are somewhat murky, and Henrik Krogius has devoted a great deal of time over the years to interviewing participants and reviewing articles, meeting notes, and hearing transcripts. He brings his efforts together in this slim book, which synthesizes years of research and reprints a selection of articles from the Brooklyn Heights Press and Cobble Hill News dating back to 1976. The book is illustrated with dozens of photographs, documenting the construction of the BQE, the cityscape before the road existed, and the Promenade.

Many people had a hand in the development of the highway, but surprisingly few of them were willing to claim credit for the Promenade. The road was originally intended to be built at one level, like most highways, and to cut through Brooklyn Heights. Robert Moses gets the blame for that proposal, which the Brooklyn Heights Association fought; eventually, the Furman Street route was settled on. The idea of a double decker highway was in the air for quite a while, as the Furman Street route cut through the back gardens of the houses on Columbia Heights.

Krogius describes the development and construction of the cantilevers, and discusses the shape of the supports and their additional function of reflecting sound away from the docs on Furman Street. He eventually concludes about the highway:

Ernest J. Clark, the project’s chief engineer, insisted that the design had been arrived at through trial and error by the team’s collaborative effort. Different ways of supporting the roadoways had been considered and their stresses and looks tested. As Clark recounted it, the cantilever design had evolved.

Krogius uncovers plenty of interesting information along the way. One example: the Promenade was ready and opened before the highway. It’s hard to imagine events happening in that order now. Curiously, no one claims credit for the idea of the Promenade, although there are several candidates, including the owners of the back gardens, and even, though he denied it, Robert Moses. Perhaps that is because, like the idea for the cantilevered highway itself, the Promenade was a good idea that also evolved. As Steven Johnson describes it in his book “Where Good Ideas Come From” some of the conditions needed for creativity are dense networks of people creating and overlapping, exposure to ideas and sharing of information, and the time that ideas or hunches need to mature. All of these factors were present in the years of planning and building the Promenade and the BQE, and the idea developed from a lot of suggestions until it was right there, seemingly obvious, to everyone. The Promenade belongs to all of us, and it is a nice thought that its origin belongs, in some sense, to the residents who preceded us.

Henrik Krogius will be speaking about his book at 6:00 pm on Thursday, March 1, at the Brooklyn  Women’s Exchange, 55 Pierrepont Street. The event is free.

Have a book you want me to know about? Email me at asbowie@gmail.com. I also blog about metrics here, and have a post about Mr. Johnson’s book here.