April 14, 2012
I’d had a taste of Brooklyn Brewery’s Sorachi Ace beer at Borough President Marty Markowitz’s presser for Dine in Brooklyn (indeed, several tastings, as the Brooklyn Brewery folks were kind about refilling my little cup as I went around tasting food), and I wanted to try it again. This afternoon I spotted it at Lassen & Hennigs, and decided it would be an interesting accompaniment to my temporary bachelor (my wife is at an archivists’ meeting in Cape May, New Jersey) dinner of Trader Joe’s barbecued pulled pork on a bun accompanied by a mixed green salad with tomatoes and mushrooms topped with T.J.’s sesame soy ginger vinaigrette dressing. Above is a photo of the impressive 25.4 fluid ounce bottle, with its Champagne-style cork. 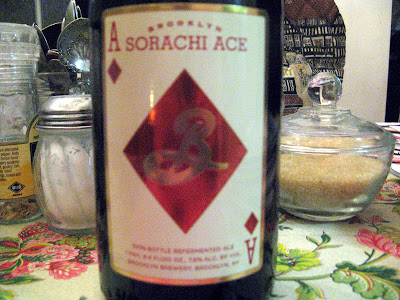 Here is a closer photo of the label. “Sorachi Ace” is the kind of hops used in making the beer. 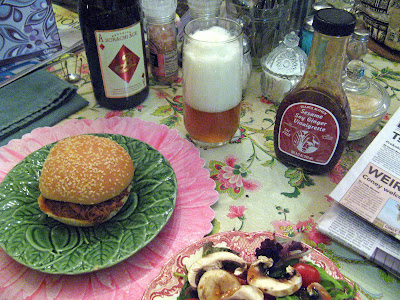 When I pulled the cork, there was a nice little “pop.” I made the mistake of pouring a bit too fast, which resulted in a huge head. After allowing it to collapse enough to pour more beer, I settled down to drink and eat. Here are my tasting notes:

Taste: rich, not overly bitter, toasty, suggestion of apricots in the finish. After I wrote those tasting notes, I did a web search for “sorachi ace hops” and got this. While the article stresses a lemony quality of the hops, the comment by Ben (scroll down) refers to ” a really creamy, cloying, buttery element” that seems to agree with my “rich” and “toasty.”

Bottom line: an interesting, well made beer that stands up to flavorful food like BBQ pork. It would also be good to savor on its own.

Break up the Mets!