Break up the Mets! 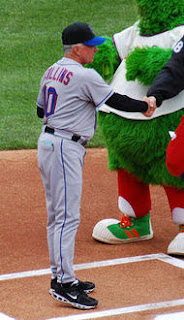 This sort of thing isn’t supposed to be happening. I was delighted by their season opening sweep of the Braves, but I recalled a similar occurrence some seasons ago, after which the Mets quickly demonstrated what statisticians call regression toward the mean. I thought that was happening when the Mets lost their second two to the Nats, including the vaunted Santana-Strasburg match-up. I couldn’t watch the game, as I was working. After seeing the 4-0 score, I asked Kristin, charming Chip Shop bartender and fellow Mets fan, if Santana had re-injured his shoulder. “No,” she said, “he’s all right. They just never hit for him.”

I’ll confess to being puzzled by this “run support” thing. The implication is that the batters dislike a pitcher, so, in games when he’s pitching, they (subconsciously, we hope) don’t see the ball as well, or take a little off their swings. But if it’s the ace pitcher who typically doesn’t get support (as with Santana), then a more straightforward explanation is that schedules often produce ace-to-ace match-ups, so the batters will facing the opposing team’s best pitcher, as the Mets may have been with Strasburg.

In another few weeks, I may look back on this post with embarrassment. For now, I’m enjoying the ride.