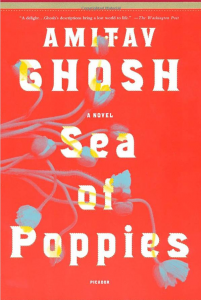 ‘Sea of Poppies’ is the first book in Amitav Ghosh’s ‘Ibis Trilogy.’ In this historical novel, set in 1838, Ghosh tells the intertwined story of Indians, Europeans, and Americans, all affected by the opium trade. First, there’s Deeti, who manages to farm a few acres, mostly dedicated to opium poppies, while her husband, an addict, works at the processing plant a few miles away. Then there’s Paulette Lambert, the orphaned daughter of a French botanist, and Jodu, the orphaned son of Paulette’s wet-nurse and nanny. Paulette is taken in by the Burnhams, wealthy shippers and shipowners, but yearns to escape their restricted life. And there’s the Raja of Raskhali, whose estates have caught Burnham’s eye.

Ghosh brings them all together on the sailing ship Ibis, and their complicated and sometimes interrelated routes to the ship comprise the novel. The Ibis has come from Baltimore, and is on its way back, via the island of Mauritius. Jodu is taken on as a crewman on the Ibis, under the orders of Zachary Reid, a mixed-race crewman who has risen to the position of second mate. The cruel first mate, Mr. Crowle, has it in for both of them, and there are some gripping and frightening passages in which he lets them know it. Deeti and her husband are among a group of girmitiyas, migrants on their way to Mauritius as indentured workers. Since Hindus who cross the ‘Black Water’ lost caste, the reader can imagine the hardships of life at home that might induce an Indian to migrate. Of course, Ghosh also relates some of the promises made to them as well.

Getting them all to the Ibis allows Ghosh to explore issues of caste, both English and Hindu. The English ranks are very clear to the English themselves, as well as to others like Paulette who come in contact with them, and Zachary, who may have something to hide. All Westerners look the same to the Indians. Ghosh also illustrates the devastating effect of the opium trade on Indian farmers — the action takes place just before the start of the Opium Wars. There are also love, and lust, opium, greed, and chicanery, financial and other types.

A great deal of the book is written in dialect; it took some time to become accustomed to it. The book includes a chrestomathy, whose second definition, per The Free Dictionary, is “an anthology used in studying a language.” I referred to it quite a bit, especially at first. Oh, and Ghosh also doesn’t use quotation marks, but in his skilled hands, I didn’t even notice until I was more than 150 pages into the book.

Are you excited about this book? The sequel in a projected trilogy, called “River of Smoke”? Let us know in the comments.

Five Year Old Hit by Taxi at Hicks and Amity