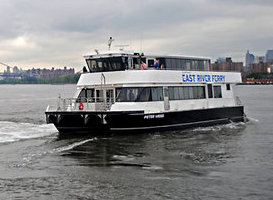 To meet demand for the East River Ferry’s pilot service, the city is adding a new fleet with more than twice the capacity on weekends. The new boats will hold 399 passengers, instead of the current 149.

In addition, The New York Times reported Friday that the city opened a new ferry slip at Pier 1 in Brooklyn Bridge Park last week designed to speed loading and unloading of passengers and reduce delays. The new floating dock is 100 yards south of the old slip at the Fulton Ferry pier, which, according to Paul Goodman, chief executive of BillyBey Ferry Co., was too small to accommodate the bigger boats and too narrow for the herds of passengers boarding and disembarking there.

As well, the schedule is being accelerated throughout summer weekends, beginning Memorial Day. Ferries will run 6:45 a.m. to 8:45 p.m. on weekdays, every 20 minutes during rush hour and every 30 minutes off-peak. On Saturdays and Sundays, the larger boats will run every 45 minutes from 9:35 a.m. to 9:30 p.m. The ferry costs $4 for a one-way ticket, $12 for an all-day pass and $140 for an unlimited monthly pass.

In its first 10 months, the East Ferry service had 714,000 paying passengers. Last fall, Goodman proposed adding boats, but that would have required more money from the city.

Meanwhile, boats sell coffee from Brooklyn Roasters, and recently added other drinks and snacks with a local flavor, including egg creams made with U-bet chocolate syrup.