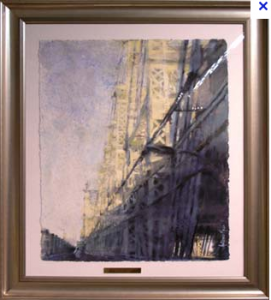 The Transit Museum’s summer show is “The Golden Age of Bridges,” and it features Antonio Masi’s dramatic paintings of the nine major bridges of New York City. The show continues through September, 2012, and Masi will be conducting two family workshops this summer. The first will be this Sunday, June 3, at 1:30 pm. (The program will be repeated on Saturday, August 4 at 1:30 pm.) The program is free with museum admission, but you need a reservation. The program is suitable for children aged 6 and up.

Masi’s technique is distinguished by his unusual use of watercolor. Usually considered a light and airy medium, Masi uses watercolor to underscore the thick and heavy steel of the bridges he paints. He combines light washes with much thicker weights to show the heavy, weighted mass of each bridge. “I discovered that watercolor can also be used in a thick manner,” he explains, “and it can express the heaviest subjects imaginable. With watercolor, I contrast the mass, power and delicacy of my subjects.”

Following a 45-minute demonstration, children and their parents will be invited to paint a bridge in themselves.

The New York Transit Museum is located on the corner of Boerum Place and Schermerhorn Street in Brooklyn Heights.

And More This Weekend: Flavors Of Lebanon Festival