A long time ago, I sat behind penny-colored pints of too-cool lager at a reasonable pub in Los Angeles called the Cat & Fiddle. I have never found a truly effective faux-British pub in this country, and the Cat & Fiddle was no exception. 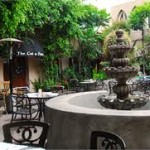 The pleasant and entirely un-British interior garden of the Cat & Fiddle Pub in Los Angeles, where today’s story takes place.

(I have a theory about that: you can’t find Bitter anywhere in this country, and without bitter, how can you have an authentically inauthentic British pub? Bitter, as you may know, is the beautifully bittersweet, gently yeasty low-carbonated beer-like beverage served at room temperature in British pubs. Bitter is one of the three foodstuffs that make me re-consider the existence of God: the other two are the Dairy Queen Blizzard and the Mussels Fra Diavolo at Peppones Restaurant in Brentwood.) 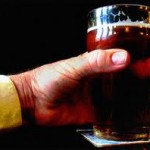 Even without Bitter (or the Abba songs seemingly always playing on British pub jukeboxes), the Cat & Fiddle was a very decent place to meet a friend and have a drink or a pile of fries. Their attempt at imitating a British pub resulted in a not un-amiable cross between a suburban basement/game-room and a theme restaurant in a casino. In any event, it was brighter and more spacious than most bars, and had a very pleasant outdoor area.

The sun sat low and bored in the sky, causing the very early evening light to slant into the room at an angle that challenged the drinker to consider whether it was time to order some bar food or seek out Sushi. I was sitting across from John Lydon, who was an occasional drinking partner at that time. John was a dear, sweet man, devoted to family and full of a fan-boy’s eagerness to rave about obscure music; he once showed up at my house in the Hollywood Hills unannounced, waving CDs by the Third Ear Band and Jacob Miller and insisting that I had to listen to these right now.

John Lydon, the star of today’s story. as he appeared at the time he told the author this sad and remarkable tale.

On this day at the Cat & Fiddle, we were talking about death. I think we may have been discussing the extraordinary power of a song off the first PIL album called “Annalisa,” during which Lydon delivers one of the most harrowing and desperate vocals ever committed to tape while telling the true tale of a teenage girl tortured and starved to death by her parents. I’ll put the power, honesty, and passion of the vocal on “Annalisa” alongside anything any white man has ever recorded, from Lennon’s “Twist & Shout” to “Pyscho” by the Sonics.

(By the way, why does everyone always use Lennon’s vocal on “Twist and Shout” as the example of the greatest rock vocal ever? Gerry Roslie of the Sonics basically did that kind of thing on every song. Seriously.)

John, who was (and I am sure remains) a remarkably sensitive and sentimental person, began to cry when recalling the girls’ plight. From there, I think our conversation moved to Kurt Cobain, who had only recently died. Not too long before Cobain’s death, attempts had been made to arrange a meeting between these two cultural giants – a potential Lydon/Cobain collaboration was very tentatively being discussed — but John had repeatedly balked at Cobain’s condition that the meeting take place at the zoo.

With these topics in the air, I decided to touch on another iconic death, closer to home.

“Where is Sid buried?” I asked. “Why isn’t Sid’s gravesite a shrine? How come I don’t hear anything about that? You’d think punk rockers would always go there and get drunk or something.”

John began to tear up. “That’s a very sad story,” he said. He then proceeded to explain.

He started by reminding me that Sid’s mother, Anne Beverly, was a junkie. In fact, John explained, she was responsible for scoring the dose that killed Sid, and may have even injected Sid with the fatal shot. I got the distinct impression that John was not particularly fond of Anne Beverly, who died in 1996 (after this conversation took place). 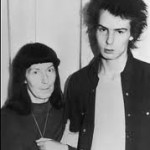 Sid Vicious and his mother, Anne Beverly, photographed prior to the events recounted in this story.

Ms. Beverley had her son cremated, John explained, and mom wanted to bring the ashes from New York City, where Sid died, back to England. So, urn in tow (according to John), she heads to JFK and boards a plane to Heathrow. No problems there; I am quite sure grieving parents or spouses transport their loved ones’ ashes internationally all the time.

Oh, DID I MENTION THAT ANNE BEVERLY HAD HIDDEN HER OWN PERSONAL HEROIN STASH IN SID’S ASHES?

At least that’s what John Lydon told me. And I suppose, all things considered, it wasn’t the worst place to hide your drugs.

Once Anne Beverly deplanes at Heathrow, John told me, she got a little nervous about going through security. There was a lot more security around than she had anticipated, and she was starting to get uncomfortable. She had been counting on the idea that airport security was unlikely to sift through a cremation urn carried by a grieving mother…but she nonetheless found herself getting really, really nervous. In fact, as she edges closer to the security checkpoint, Mrs. Sid’s Mother becomes convinced that they are on to her, and that the urn is going to get searched and she is going to be in a stack of trouble.

So, Anne Beverly did the only logical thing that a mother carrying her heroin stash in the urn containing her son’s dead ashes could possibly do: She eyed the nearest well-concealed air conditioning vent, and dumped the entire contents of the urn down the vent, where they disappeared forever.

By this time, John is BAWLING. “So,” he sobs, “to this day Sid is floating around somewhere in Heathrow.” 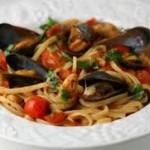 (The Author states that although the above tale is a true account of an actual encounter with Mr. Lydon, he can in no way confirm the veracity of Mr. Lydon’s story, and it is not stated as fact by either him nor the Brooklyn Bugle. Further, he acknowledges that Mussels Fra Diavolo may not actually be on the menu at Peppones, but was possibly a dish specially requested by the author.)
Be Sociable, Share!

The Who at the Barclays Center: Not A Teenage Wasteland

The Unbearable Lightness of Being Vini Reilly