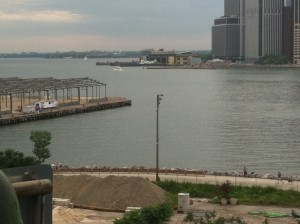 Local residents spotted a body floating in the East River below Brooklyn Heights Saturday morning. According to DNAInfo.com, rescuers responded to residents’ calls at 8:55 a.m. Saturday, and harbor crews from the NYPD recovered a body along the shoreline at Furman Street in the vicinity of Cranberry Street.

EMS responders at the scene attempted to resuscitate the man, who police said was in his 30s, but pronounced him dead at the scene. Police say it is unclear what led to the man’s death. They are conducting an investigation.

Watch this Video of the Freedom Tower Being Hit by Lightning