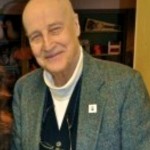 Emmy-award winning news producer & 22-year editor of the Brooklyn Heights Press Henrik Krogius has announced his retirement, reports the Brooklyn Daily Eagle. At the helm of the 75-year-old Brooklyn Heights Press and Cobble Hill News weekly, “Krogius chronicled the neighborhood’s change from a insular, Manhattan-oriented world to its present day as part of a transformed Brownstone and Downtown Brooklyn,” the paper says, adding, “His award-winning photography, insightful editorial comment and a deep working knowledge of Brooklyn’s history made the paper a must-read for residents of the Heights.”

In a farewell editorial, Krogius shares, “My career has gone through many changes, from movie house newsreels to early-days black-and-white television to color television and satellite transmissions, and back to the traditional weekly newspaper. I’ve sometimes felt I was a living anachronism, watching obsolescence take over everything I was involved in. Perhaps it’s time for something more restful or in any case, some project not bound to the insistent wheel of progress or ‘progress.’” (Photo: CT)