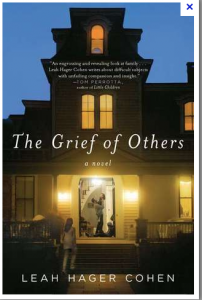 Going it alone is something that people do when they feel they can’t trust another person, for one reason or another. John and Ricky Ryrie, the couple at the center of Leah Hager Cohen’s novel, don’t believe in each other despite their more than 15 years of marriage. Their lack of trust communicates itself to their children, two they have together (Paul, 13, and Biscuit, 10) and the third, Jessica, 23, who is John’s daughter from a brief college romance. The other main character, 19-year-old Gordie, goes it alone too, but he is forced to do so by circumstances: his mother died when he was born, and his father has just died.

‘The Grief of Others’ opens with a flashback which describes the brief life and almost immediate death of the infant anencephalic son of John and Ricky. A year later, each parent is so caught up in the immediate tragedy that they forget its effects on the others in the family. In a week of mounting challenges – Biscuit has been skipping school, Paul is being bullied – Jess shows up in their Hudson Valley town, having crossed the country by bus, and announces herself to be pregnant and estranged from her parents. The same day, Gordie appears in their lives, coincidentally but fortuitously.

As the story develops, it’s clear that these characters have been intent on emotional distance. Jess’s mother has raised Jess herself, wanting nothing to do with John, though at Jess’s insistence she did meet her father and his family, and in fact once spent a happy vacation with them. As if in response to the fact of John’s child, born before they met, Ricky had a brief, if meaningless, sexual fling just before she married John. Though she pretends to John that the baby’s deadly neural tube defect was a surprise to her at his birth, she in fact knew of it, and kept it secret from John, from the time she was about five months pregnant. As a result, all four of the Ryries are wrapped up in their own feelings, the two children wordlessly, and each is something of an enigma to the others.

The depiction of a family whose life together has spiralled out of control is convincing, and harrowing – this book kept me up for a couple of nights, after I tried to read it right before bed. But they struggle onward, and eventually each character starts to respond to the others, rather than to their own thoughts and feelings. It’s an assured, vivid telling of a story of ordinary people muddling through unusual circumstances made worse by their past actions. Do you agree? Let us know in the comments.

Leah Hager CohenThe Grief of Others