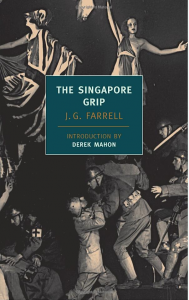 What is the Singapore Grip? Walter Blackett is the managing partner in the oldest British firm in Singapore (rubber plantations, export-import, warehouses), owner of a large house set in a larger garden, and paterfamilias (two daughters and a less-than-satisfactory son). In 1941 Walter is preparing to celebrate Blackett and Webb’s jubilee, complete with garden parties and a morale-boosting parade for the Japanese, Chinese, Tamil, and Malay workers. (He has coined a slogan: Continuity in Prosperity.) The war in Europe is far away, and Blackett’s biggest problem is finding a proper husband for his elder daughter, Joan. He soon faces another issue: his senior partner, old Mr. Webb, suffers a stroke during a garden party, soon dies, and is no longer available to sit on a float representing Continuity in the parade. Despite his class credentials Walter has a secret: a ridge of bristles growing over his spine; they have “a tendency to rise when he was angry and sometimes, even, in moments of conjugal intimacy.” To the Blacketts, Singapore is the place they have tamed and mastered on behalf of the British Empire.

What is the Singapore Grip? Matthew Webb is the son of the late Webb, whose travels to Singapore after his father’s death are delayed and sidetracked by the needs of those fighting that unimportant war back in Europe. When he finally arrives, the soldiers tell him to avoid the Singapore Grip; since he is a little feverish already, he assumes the Singapore Grip is some kind of flu. Matthew first takes up with Joan Blackett, then changes his mind; he moves into his father’s former residence. Major Archer, who readers may remember as the protagonist in “Troubles,” is already in residence. (You can read my review of “Troubles” here.) Matthew has been educated progressively, and Walter, while eager to manipulate the younger man, is suspicious of him. And rightly so, as Matthew holds views about colonialism and social and human progress that are not always compatible with those of the ex-pats who have spent their lives in Singapore.

What is the Singapore Grip? Singapore was the great entrepot of the British Empire, linking its colonies in India and Africa with Asia. In addition to the various races brought in to work the land and the ships, prostitutes were plentiful, and the Singapore Grip may be what one writer – perhaps Roald Dahl? If you recognize the phrase, let us know in the comments – called muscles in a place where no woman should have them. Matthew falls in with a Eurasian, Vera Chiang, who has offended Joan and who may or may not be a prostitute. Meanwhile, Japanese planes have been seen over the Malay Peninsula, which is only lightly defended. First Penang, then Kuala Lumpur and finally Singapore itself fall to the advancing Japanese. Most of the women escape, as do a few of the men. The rest must survive the coming Japanese occupation. Farrell lets us decide who is interned, who survives, and who does not.

“The Singapore Grip” is the final book in Farrell’s great Empire trilogy. (The first is “The Siege of Krishnapur;” “Troubles” is the second.) Taken together, they are a wonderful portrait of an empire from ascendancy to decline, developed and governed by perfectly ordinary people who found themselves in unusual circumstances and often exotic locales. Do you agree? Let us know in the comments.