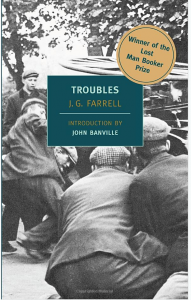 “Troubles” is JG Farrell’s long exploration, from the point of view of an English visitor, of Ireland in the years 1918-1921, immediately after the First World War and, perhaps more relevantly, shortly after the Easter Rising of 1916. “Troubles” won the Lost Man Booker Prize  of 1970, and is the first published of J.G. Farrell’s great Empire Trilogy; the others are “The Siege of Krishnapur” (about the 1957 Indian Mutiny, it was the winner of the 1973 Man Booker Prize) and “The Singapore Grip” (about the Japanese capture of Singapore in 1942). Together, the books explore the impact of the British Empire on the colonized peoples and the British who went into the colonial service to govern their lands and administer their laws.

At the end of the Great War, Brandon Archer, who has recently been released from hospital, where he was treated for unspecified war wounds, has traveled to Ireland. He is visiting Angela Spencer and her Anglo-Irish family, who own a magnificent if crumbling hotel on the east coast of Ireland called the Majestic. Angela and Archer have an uncertain but quasi-official understanding that they will be married; at least, that is what Archer believes, but Angela’s indifferent behavior towards him rather undermines that belief. He befriends Angela’s brother Ripon, and their younger twin sisters, the misnamed Charity and Faith, and Sarah Devlin, the crippled (and Catholic) daughter of a banker in neighboring Kilnalough. Archer bemusedly becomes more and more involved in helping Angela’s father, the quite possibly mad Edward Spencer, in running the hotel, still populated by a set of genteel ladies with little money and no place else to go. Eventually, it becomes clear, even to Archer, that Angela is too unwell ever to wed. After her funeral, he returns to London on family business, and Sarah visits him there. And then his hopes for a future with Sarah take Archer back to the Majestic just as Irish unrest is stirring.

Unable to leave, Archer spends a lot of time exploring the hotel and its grounds. Sometimes he accompanies the increasingly unstable Edward on his rounds. Starving tenants steal food from the hotel’s fields, and Edward is determined to protect his fief – he establishes a shooting range, houses some pigs in a squash court, and is intent on setting up defense lines that will allow him to guard his hotel from the violence he expects from the Irish Republicans. Archer looks on or participates in all of these activities. At other times Archer is accompanied by one or more of the young ladies, and in the evening he plays cards or talks with the older ones. The old ladies play their part as well, carrying on shopping trips into the local town of Kilnalough as if nothing were wrong. Interspersed with the detailed descriptions of the old ladies and their efforts to teach the upstart Irish some manners during shopping trips and an account of a final grand ball Edward has decided to throw are news articles describing incidents of resistance to British rule, in Ireland, in India, in Mesopotamia.

There are some very funny moments in this book. My favorite theme among them was the cats who keep appearing and reappearing. And reproducing. The Majestic and Edward Spencer are entertaining stand-ins for the British Empire in decline. But what I kept thinking about was this: what draws Brandon Archer to Kilnalough and the ramshackle Majestic is the young women. But what keeps him there well past the point of safety? Lethargy? Noblesse oblige? Perhaps after the great war he feels there is nothing left to live for? Let us know your thoughts in the comments.

Have a book you want me to know about? Email me at asbowie@gmail.com. I also blog about numbers for people who hate numbers here.

Brooklyn Bugle Book Club: A Visit From the Goon Squad